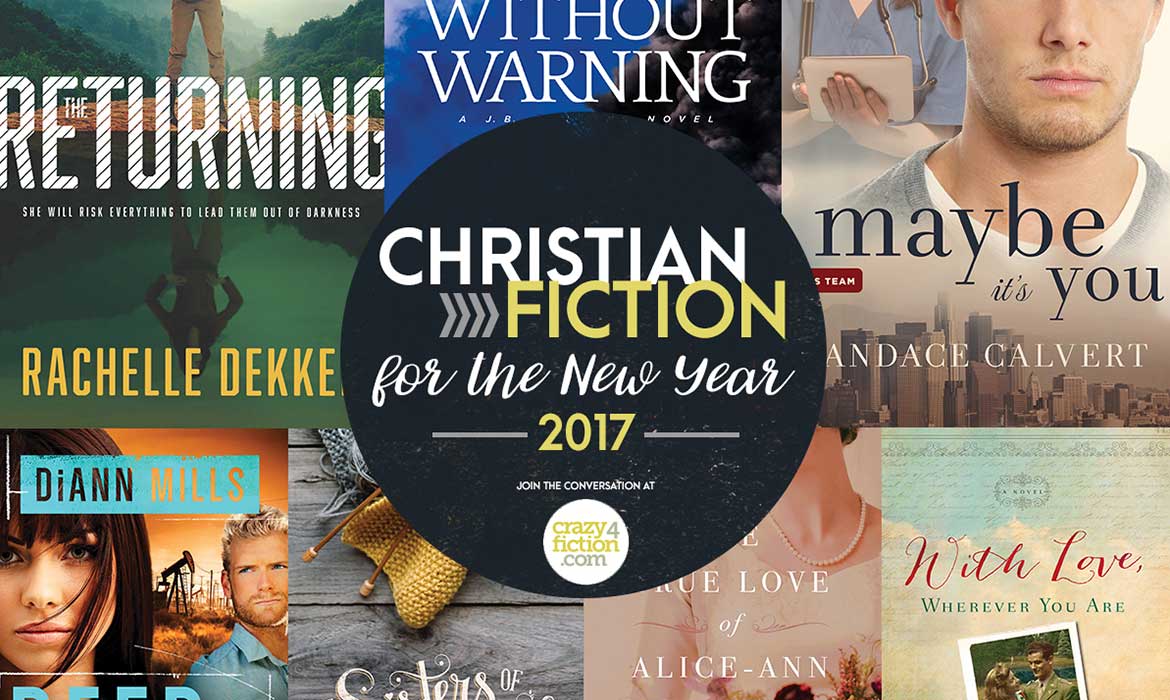 Christian Fiction for the New Year

Happy New Year, book lovers! And with the new year comes our favorite: New novels to read! Here are the 2017 Christian fiction new releases we are most excited about:

The Returning by Rachelle Dekker

The third and final book of Dekker’s Seers series (after The Calling) begins nearly two decades after Elise Brant was kidnapped as her parents and other Seers (those who can sense their true calling) fled Authority City. After the Seers’ departure, Dr. Roth Reynard injected Authority residents with Genesis Serum, erasing memories and creating an unnatural, robotic state of peace. Immune to the serum, Elise has long posed a threat. Fearing Elise’s power, Reynard orders her death and sends security forces to round up and return the rebels to Authority City. Once the seven find Elise, it’s a battle against time and resources to bring light to the delusional darkness fostered by Reynard. Dekker pens another striking science fiction thriller including a well-developed dystopian society and strong depictions of good versus evil that can be easily read as a standalone. (Publisher’s Weekly)

Without Warning by Joel C. Rosenberg

As he prepares to deliver the State of the Union address, the president of the United States is convinced the Islamic State is on the run, about to be crushed by American forces once and for all. But New York Times foreign correspondent J. B. Collins tells the president he’s dead wrong. With the Middle East on fire, the Israeli prime minister dead, and Amman in ruins, Collins fears a catastrophic attack inside the American homeland is imminent. He argues that only an all-out manhunt to capture or kill Abu Kahlif—the leader of ISIS—can stop the attack and save American lives. But will the president listen and take decisive action before it’s too late?

A pacemaker should have saved oil and gas magnate Nathan Moore’s life. Instead, it provided his killer with a seemingly perfect means of execution. A bombing at one of Nathan’s oil rigs days earlier indicates his death could be part of a bigger conspiracy, a web Special Agent Tori Templeton must untangle. But her first order of business is separating the personal from the professional—the victim’s wife, her best friend, is one of the FBI’s prime suspects. Clearing Sally’s name may be the biggest challenge of her career, but Tori finds an unexpected ally in the newest member of the task force, recently reinstated Deputy US Marshal Cole Jeffers. As Tori and Cole dig deeper into Nathan’s personal and business affairs, they uncover more than they bargained for. And the closer they get to finding the real killer—and to each other—the more intent someone is on silencing them for good.

Maybe It’s You by Candace Calvert

ER nurse Sloane Ferrell escaped her risky past—new name, zip code, job, and a fresh start. She’s finally safe, if she avoids a paper trail and doesn’t let people get too close. Like the hospital’s too-smooth marketing man with his relentless campaign to plaster one “lucky” employee’s face on freeway billboards. Micah Prescott’s goal is to improve the Hope hospital image, but his role as a volunteer crisis responder is closer to his heart. The selfless work helps fill a void in his life left by family tragedy. So does a tentative new relationship with the compassionate, beautiful, and elusive Sloane Ferrell. Then a string of brutal crimes makes headlines, summons responders . . . and exposes disturbing details of Sloane’s past. Can hope spring from crisis?

After a whirlwind romance and wedding, Helen Eberhart Daley, an army nurse, and Lieutenant Frank Daley, M.D. are sent to the front lines of Europe with only letters to connect them for months at a time. Surrounded by danger and desperately wounded patients, they soon find that only the war seems real—and their marriage more and more like a distant dream. If they make it through the war, will their marriage survive? Based on the incredible true love story, With Love, Wherever You Are is an adult novel from beloved children’s author Dandi Daley Mackall.

The One True Love of Alice-Ann by Eva Marie Everson

Living in rural Georgia in 1941, sixteen-year-old Alice-Ann has her heart set on her brother’s friend Mack; despite their five-year age gap, Alice-Ann knows she can make Mack see her for the woman she’ll become. But when they receive news of the attack on Pearl Harbor and Mack decides to enlist, Alice-Ann realizes she must declare her love before he leaves. Though promising to write, Mack leaves without confirmation that her love is returned. As their correspondence continues over the next three years, Mack and Alice-Ann are drawn closer together. But then Mack’s letters cease altogether. Alice-Ann fills her days with work and caring for her best friend’s war-torn brother, Carlton. As time passes and their friendship develops into something more, Alice-Ann wonders if she’ll ever be prepared to say good-bye to her one true love and embrace the future God has in store with a newfound love. Or will a sudden call from overseas change everything?

The Sisters of Sugarcreek by Cathy Ligget

Lydia Gruber is a young Amish widow, whose husband took care of everything. When he dies in a fire, she must learn how to survive. Liz Cannon lost her friend Rose in the fire. The two had created the Secret Stitches Society, delivering gifts in the middle of the night to folks in trouble. She must rebuild her new life now with out Rose. Jessica Holtz inherits Rose’s Knit One Quilt Too Cottage. Even though she knows nothing about knitting or quilting, she is determined to keep the shop open in her aunt’s memory. Liz convinces Jessica to keep the anonymous society going, despite the younger women’s inadequacy with knitting and sewing needles. When Liz and Jessica choose Lydia for their first mission, the three women cross paths and form an unlikely friendship in the aftermath of tragedy.

Keep an eye out for sneak peeks, giveaways and other fun behind the scenes on these upcoming releases at Crazy4Fiction.com

Other
Advertisement
Analytics
Functional
Performance
Save & Accept
Powered by