This Month in Tyndale History: May Edition

Here’s some notable Tyndale May events over the past 50 years.

Ken Taylor receives an honorary doctor of literature degree from Wheaton College. Various other honorary degrees will be conferred upon him in future years by Trinity College, Huntington College, and Taylor University.

The periodical , Have a Good Day is launched, joining The Christian Reader and Christian Times in Tyndale’s family of periodicals. It eventually reaches a high circulation point in excess of 1 million copies per month.

The Way is published. The photos and book introductions in this illustrated edition of the complete Living Bible were prepared by the editorial staff of Campus Life magazine. Over the next 30 years, Tyndale House will sell nearly 6.4 million copies of The Way in numerous binding options. 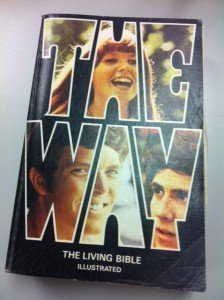 A new 40,000 square foot warehouse and distribution center is built at 351 Executive Drive, on the land directly south of the Gundersen Drive property. The new facility is completed just in time for the explosive distribution of The Book .