Mike Nawrocki, Co-Creator of VeggieTales, is Back with an All-New Kids Chapter Book Series: The Dead Sea Squirrels

When a boy’s sense of curiosity outweighs his commonsense, he can sometimes find himself alone in a cave in the Middle East in the middle of the night. It doesn’t happen that often, but when it does, it usually means trouble. As hard as Michael tried to fall asleep, and as much as his conscience told him to stay in bed, in the end, he decided that he just had to know what was on that ledge.

I’m the son of a scientist, he reasoned to himself as he plodded through the cave with only the sound of his footsteps on the dusty stone floor to keep him company. Discovery is in my blood! These thoughts helped him feel a little better. Conveniently, they also let him blame his dad for his decision not to listen to his dad.

The loud squeal of a bat pierced the silence.

The louder scream of a frightened boy followed. Michael dropped both his flashlight and his map. He heard the creature’s wings flapping behind him toward the mouth of the cave as he leaned against the rock wall, breathing heavily. The fact that a dead bat is what Michael was expecting to find at the end of his quest didn’t do much to lessen his surprise. “It’s just a bat. Bats live in caves,” Michael said out loud, reassuring himself. He picked his flashlight back up, located the map, and was soon on his way again. 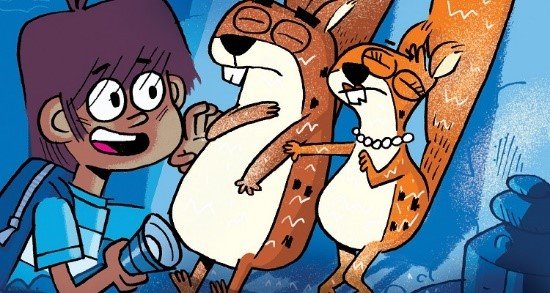 It turns out that Michael’s memory—and his map-drawing skills—were pretty good. After about 20 minutes, three right turns, two left turns, and one more squealing bat encounter, Michael found himself exactly where he hoped to be—at the foot of the ledge.

Justin will be amazed when he sees what I bring back, Michael thought proudly as he took a length of rope out of his backpack. Holding tightly to one end, he tossed the other end of the rope up and over a rock that jutted out from the ledge. It looped smoothly over its target and fell softly at his feet. “This is almost too easy!” Michael said out loud, impressed with his own rope skills. “Yep. Exploring is definitely in my blood. ”He anchored one end of the rope to a heavy rock on the floor of the cave, put the flashlight in his mouth, and began his climb. In no time, he found himself peeking over the top of the ledge, his eyes going wide as he made his discovery. If he hadn’t had a flashlight in his mouth, he would have said,“Whoa . . .” But since he did have a flashlight in his mouth, what came out was, UHRAAA . . .

Exerpt taken from: Dead Sea Squirrels: Squirreled Away. Published in May 2019.