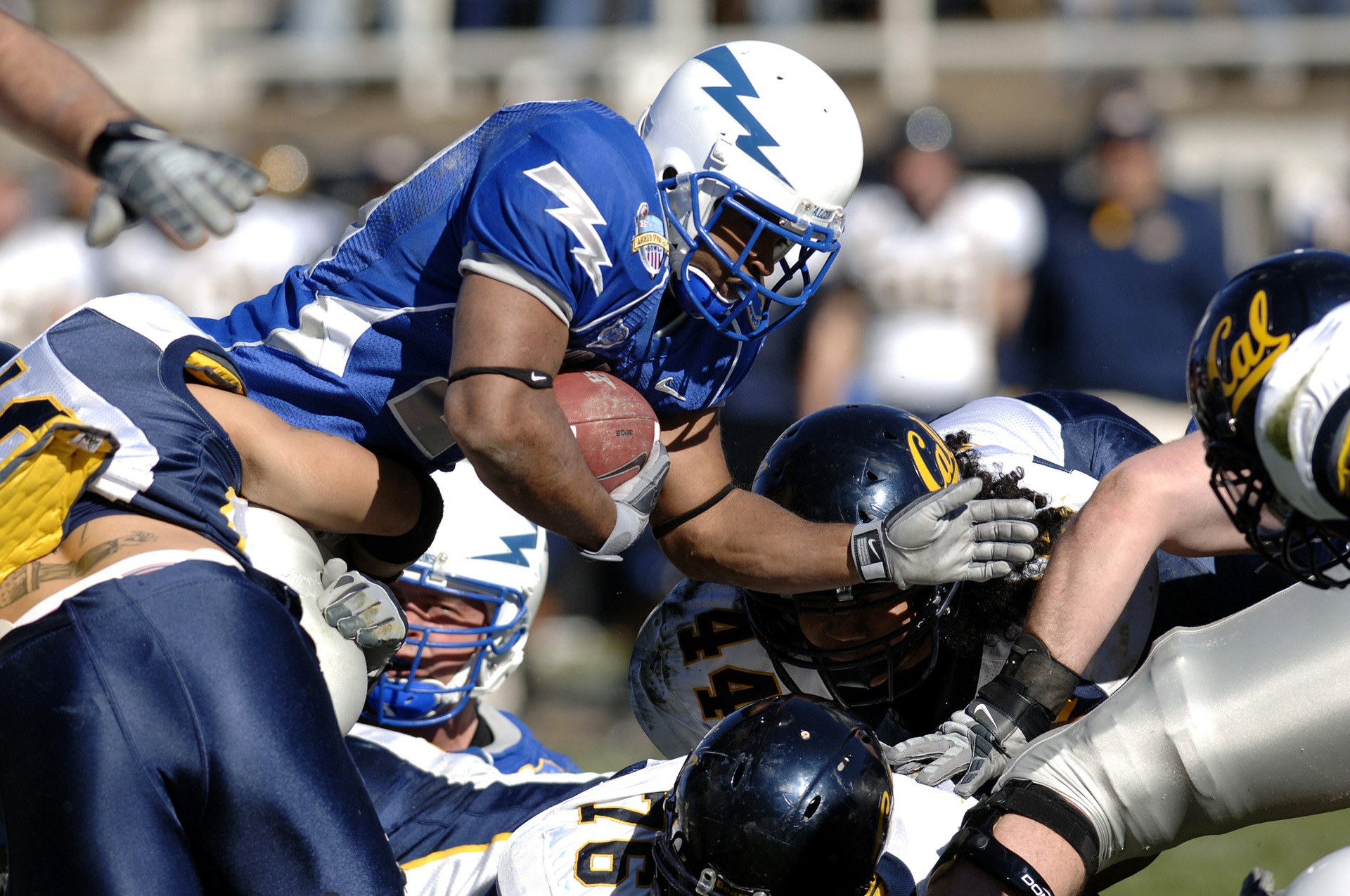 When Life Hits You With Ambiguous Loss

“Is Zach going to be okay?” Soren’s vocal cords registered enough tension for all of us. Sure he is lay on the tip of my tongue. Why wouldn’t Zach be okay? I couldn’t nudge the words any farther. No matter how fast we drove or how much traffic we negotiated, the distance between us and the hospital seemed to widen rather than shrink. We should have been at the scrimmage.

by Pat and Tammy McLeod, authors of Hit Hard

“Pat, can’t you drive any faster?”

I gripped the seat belt that lay across my chest and lifted it away from my body so I could breathe easier. The crushing pressure remained. The pain’s genesis must have been internal.

Pat checked his rearview mirror and pressed down on the accelerator. Boston traffic. He hit the blinker and steered our car into the other lane, swerving in front of a slow­-​moving delivery truck.

From the backseat, I heard ­eleven-​year-​old Soren draw a sharp breath, reminding me we weren’t alone in this race to the hospital. I glanced over my shoulder. Soren sat, wide­-eyed,​ tugging at his own chest strap.

I turned to watch Boston fly past my passenger window, but Pat’s profile reflected back to me in the glass. Even with-out a clear image, I could see the distress written all over his posture.

“Tell me again exactly what Nate said to you on the phone, Pat.” As if recounting it one more time would uncover a new ­detail—a​ missing fact that would make sense of the message our fourteen­-year​-old​ son had screeched over the phone, jerking our hearts out of rhythm. I listened again as Pat repeated the scant information he had received from Nate.

I’m the no-nonsense one between us. I’m the give-it-to-me-straight­ person. But I’m also a ponderer. Nothing about the minutes between us and the hospital gave me anything to slide into orderly notches. Logic? Absent. Thoughts worth hovering over? Gone.

Pat’s focus was still trained on the traffic in front of us, and behind us, and on either side. Before. Behind. Beside. Familiar words in unfamiliar territory.

“We have to be prepared, Tammy,” Pat whispered.

“Is Zach going to be okay?” Soren’s vocal cords registered enough tension for all of us.

Sure he is lay on the tip of my tongue. Why wouldn’t Zach be okay? I couldn’t nudge the words any farther. No matter how fast we drove or how much traffic we negotiated, the distance between us and the hospital seemed to widen rather than shrink.

We should have been at the scrimmage.

“Regret travels at the speed of light,” Pat spoke into our silence.

How had he known what I was thinking? We would have been there. But we’d been responsible for organizing the meeting that evening where hundreds of Boston students would take their first steps toward integrating faith and college life.

Zach’s scrimmage. There’d be others we could attend. Now that idea seemed absurd. We’d been laughing with, hugging, and counseling other parents’ kids in our role as campus chaplains at the defining moment when, twenty miles outside of Boston, our ­sixteen-​year-​old Zach took a hard hit on a high school football field.

Now stoplights and speed limits, like referees on a field, had become impediments in the way of getting to our son.

A ­gut-​bruising unlike any other. An excruciating pain in my chest. Though I’d played a lifetime of sports, I don’t remember a hit like the one I felt when Tammy and I were finally allowed into Zach’s cubicle in the Boston Medical Center trauma unit.

Zach had four faces—relentless joy, I’m-plotting-a-joke-you-don’t-know-about-yet, intimate worship, and irrepressible compassion. But now it reflected no reaction. His face was expressionless. Blank. Empty of everything that defined our son.

Temporary. This is only a temporary condition. When the shock wears off . . .

I’d seen hard hits before. Came with the territory of being a football family. My grandfather played football. My dad played and coached football. Both of my brothers played football—​one professionally for the Green Bay Packers. I’d played college football and coached high school football before my current job in Boston with Harvard students. We McLeods knew about hard hits.

We knew risks exist with any sport. They’d all seemed worth it. But at that moment, as I held Zach’s limp hand and searched his face for the slightest flicker of life, I realized I didn’t know anything at all.

I should have been there on the sidelines. Guilt came as an unbidden distraction.

While Zach was lying on the football field, Tammy and I stood with our youngest­—­Soren—at​ the back of an auditorium filled with college students. None of the hundreds of smiling, laughing, chatty students seemed in a hurry to leave when the first citywide meeting of the year ended. The walls vibrated like a stadium after a victorious homecoming football game, as if Harvard had just beaten Yale. Close friends who had spent the summer on different coasts spotted each other across the room and screamed like revelers in a mosh pit at a rock concert.

I had been caught up in the celebration and reunions until I felt a tug on my sleeve in the middle of a conversation. A Harvard ­student—­Julia—​handed me her phone. I might have been irritated by her impatience if it hadn’t been for the look of anguish on her face.

I held her phone to my ear and heard panic in Nate’s voice, our middle son. He was supposed to be at the meeting with us, but he’d begged to stay home that night.

“Dad, why aren’t you answering your phone?” Nate’s words tumbled out as if pouring through a fissure in a dam. “I’ve been trying to reach you. Zach’s hurt.” His voice hitched. “Coaches have been calling. Parents of other players are calling. Now the hospital is calling!”

Drama came second nature to Nate. I hesitated to indulge him without knowing the details.

It wasn’t the first time we’d received a phone call that one of our four children had been injured. Nate had broken his arm five times. We’d deal with it. Inconvenient, but parenting is rarely convenient. In the moment, I briefly hoped whatever had happened wouldn’t be serious enough to make Zach miss that week’s game. He was tough. He’d played hurt before.

But I’d pressed the borrowed phone to one ear and covered the other with my hand while I made my way out of the noisy auditorium.

“He collapsed during the scrimmage,” Nate said.

“They’re taking him to the hospital. In a helicopter!” His voice wavered again. “Dad, they said they need your permission to perform emergency brain surgery.”

What? No. Kids get broken bones and twisted ankles. Not emergency brain surgery.

Minutes later, after I’d rounded up Tammy and Soren, we were in the car darting in and out of traffic on Massachusetts Avenue. The three of us arrived, breathless, at the door of the emergency room. We left Soren with a band of five speech-less, stoic, obviously troubled football coaches so Tammy and I could get to Zach.

I struggled to square the energetic young man I knew with the unmoving, unresponsive son lying in front of me.

Tammy’s head was bowed. She rocked side to side as she had when she’d held Zach and our other children as newborns. Same Zach. That one.

The boy whose love for the outdoors and passion for adventure emerged during his early life in rugged Montana. The son who, nine years before, had wholeheartedly embraced urban life when we moved to Boston. The boy who’d exchanged being pulled on a horse­-​drawn sled for hopping on the back of a UPS truck while it raced around the streets of our Boston­-​Cambridge­ neighborhood. The one who’d replaced deer hunting with tackling our temporary rodent problem using his pellet gun, on the lookout for the rat he spotted in the basement every morning when he retrieved his bike.

That same boy now lay before us, still clad in the bottom half of his football uniform, including his football cleats. Zach’s eerily unmoving body mocked the boy he’d been, the one who traded riding his bike along logging trails of a national forest for weaving in, out, and over the potholes and granite curbs of Boston. That’s my Zach. Tough and resilient.

Zach’s steady breathing slowed my pulse. Zach was breathing. His face was blank, but ­peaceful—no​ sign of pain. When the surgeon burst through the doors with an entourage of doctors and nurses, he brought all the pain with him.

“We need to open his skullcap and remove a blood clot to save his life,” the surgeon said, mincing no words. “This can result in anything from death to full recovery or anything in between.” Handing us a clipboard, he added, “Sign here.”

Chilled by the cold words and emotionless delivery, we signed. We weren’t invited to ask questions but probably couldn’t have thought of any after a blow like that.

A nurse broke the tense residual silence left in the surgeon’s wake. “You can talk to your son. He hears you.”

How does she know? Tammy and I took Zach’s hands, leaned over him, and breathed in the ripe­-​athlete smell of our first ­man-​child. We whispered a prayer in each ear and kissed his cheeks, our faces a much­-loved​ son apart.

Two startling clicks announced that the nurses had unlocked the wheels of his bed. They could waste no more time.

I expected Tammy would melt into my embrace when we were left alone. I hadn’t expected to feel as if I wasn’t strong enough to hold myself upright, much less her. Or that instead of remaining in my embrace, she’d push away too soon and head for the waiting room to console the growing crowd of the concerned.

In the moment just before we stood alone, we watched the medical staff steer Zach through the double door toward a surgery with the power to give his life back . . . or take it from him.

Hit Hard: One Family’s Journey of Letting Go of What Was–And Learning to Live with What Is by Pat and Tammy McLeod

Life hit Pat and Tammy McLeod hard when their son Zach collapsed on a high school football field; he had sustained a severe brain injury. Facing the devastating possibility that things would never be the same for their beloved son, they committed to staying strong as a family and finding a way to maintain their footing. But the journey would reshape their faith, their family, and their future in ways they never saw coming.

What would it take for them to navigate the endless fallout of their son’s life-transforming injury? How could they reconcile their grief over the life Zach lost, with gratitude for the life that remained? And how does a couple move forward together in their search for hope, rather than letting indefinable loss drive them apart?

Hit Hard is the true story of the McLeods’ journey through ambiguous loss—both having and not having their son. It’s the story of a family who faced unexpected heartbreak, a story that offers us all glimpses of how we can pick up the pieces, redefine expectations, and trust God for hope in the midst of unresolved pain.