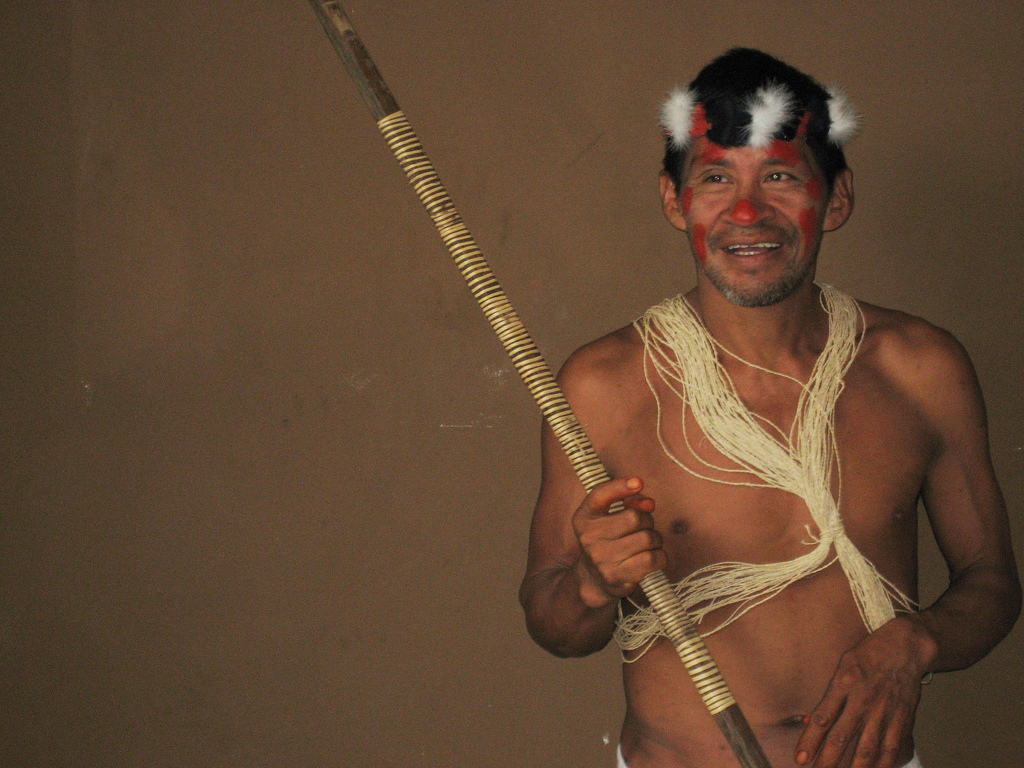 Unraveling Mysteries Of The Past

. . . without the humility, she never would have been willing to live in a thatched hut in the middle of nowhere. Without the stubbornness, she never could have survived the violent cultural chaos that characterized life among the Waodani, known to the outside world as “Aucas”—savages. Without her, it is possible that there would have been no one left to welcome us at our destination.

by Steve Saint, author of End of the Spear

The head flight attendant had given us the customary briefing before takeoff. It was obvious that her first language was not English. I couldn’t help but feel a sense of excitement as the powerful engines on the 757 pushed me back in the seat.

We were a cosmopolitan bunch. Experience (and numerous Goofy hats) told me that some on board had been to Disney World. Others, apparently from the upper socioeconomic end, had probably come to the land of malls and shopping extravaganzas to update their wardrobes. But there were also some who had the coarse hair and weathered skin of the mestizo, those born from the mingling of Spanish conquistadores and descendants of the Inca Empire they conquered.

Back To The Stone Age

I love to fly, but not back where I was sitting. I like the front left seat, where I can select my destination through the smallest manipulations of the controls. My stomach goes queasy every time a pilot I don’t know—with my life in his hands—pulls back the power levers and we begin to decelerate while still pointed up at an alarming angle. In the small aircraft I fly, reducing power with the nose pointed at the sky is an invitation to stall and spin.
But my mind was on other things this night. I tilted the seat back and closed my eyes.

On the other end of this flight I would spend a short night in the Andes Mountains. I hoped I would not get that crazy, suffocating sensation that had kept me awake in Quito’s thin atmosphere on recent visits. Years before, when I lived and went to school almost ten thousand feet up in the mountains, I could play a full game of basketball and feel fine. Now, twenty-five years later, I had begun to understand what tourists complain about: “I can’t catch my breath” or “I wake up gasping for air.”

If they have Aunt Rachel’s body ready, I should be on my way down to the jungle early the next morning, I thought.
Just the day before, I had been sitting at home after a long day of the same old, same old—driving around, talking on the cell phone, haggling over a few cents now that could make a difference of thousands of dollars down the road—the usual knockdown, drag-out life of a businessman. When the phone rang, I almost didn’t answer. At home, Ginny answers the phone. She is a lot nicer to telemarketers, and after a day with my hand to my ear, I didn’t want to talk into a machine anymore.

We had been expecting the call, but I still was not ready for it. “Hi, is this Steve?” I could tell the voice on the other end was calling from outside the United States. “I’m sorry to have to tell you that your aunt Rachel died this afternoon. I think it would be good if someone from the family could come down. Remember, down here we have to bury within twenty-four hours. I can ask the doctor if he can do some embalming, but that will only buy us a few hours. If we take too long, the authorities will make us bury her in Quito.”

Aunt Rachel had been in Quito to receive treatments for cancer. But I knew she had wanted to be buried at home in the jungle, with the people she loved—the Waodani. Mom and my stepdad, Abe, were out of town. I knew they wouldn’t be able to get down to Ecuador in time. I would have to represent the family and help bury “Star,” as the people there called her.

As we cruised high over Cuba, I wondered how to best get my dear old aunt’s body down to the jungle. And I contemplated how I could keep the Waodani who had loved her from being overwhelmed by “outsiders” wanting to get in on this historic event.

I woke up to the same voice that had put me to sleep: “Pleeze fosten yur-e seat bels fur ourr londing in Quito.” Now I was glad I wasn’t sitting in the left front seat. Quito lies in a tight valley rimmed by Andean mountain peaks. The city spreads right to the runway threshold, and on this night there was a heavy fog hanging over the valley floor. If we couldn’t make a landing on our first couple of tries, we would have to divert to the coast and spend the night in Guayaquil, and I would almost certainly miss the reason for which I was coming. But thankfully, we made it.

By the time I got to the Quito airport early the next morning, Aunt Rachel’s body, wrapped in sheets, was already lying on the floor of the Cessna bush plane that would take us home. I took the seat beside her body. As we flew down the Avenue of the Volcanoes, regal snowcapped peaks rose above our flight altitude and disappeared into the overcast sky above us. Normally, we would have made a fuel stop on the edge of the great Amazon rain forest, but we were in a hurry. I heard our pilot request that another plane deliver the casket and bring extra fuel for him. I watched as we flew over the little town where I had spent my most formative years. Aunt Rachel had been a big part of those years. I felt a yearning to tell her just once more how much I loved her and respected her willingness to risk everything for what she believed. She was the most humble, but also the most stubborn, person I had ever known. Without the humility, she never would have been willing to live in a thatched hut in the middle of nowhere. Without the stubbornness, she never could have survived the violent cultural chaos that characterized life among the Waodani, known to the outside world as “Aucas”—savages. Without her, it is possible that there would have been no one left to welcome us at our destination.

The Waodani heard the plane coming and were standing by the short gravel-and-grass strip when we landed. The makeshift runway was surrounded on all sides by a sea of dense jungle. Dayumae, Aunt Rachel’s closest living “relative” in the tribe, was the first one I saw after I opened the plane door. She greeted me and then saw what was left of the cowodi—foreigner—she had adopted as her sister more than four decades before. Her reaction was chilling.

She began to wail, taking me by surprise. The Waodani, her own people, don’t do that. But Dayumae had spent fifteen years living with the Quechua, a neighboring tribe, and had adopted much of their culture. Their death wail is a dark window into the excruciating agony of a human soul that has little control over its own destiny. The rest of the group retreated from Dayumae’s grief.

Finally, the pilot and a couple of Waodani and I unwrapped Aunt Rachel’s shroud and lifted her body from the plane into the simple plywood box that would serve as her coffin. It seemed appropriate for this old Saint who had never worried about luxuries or her own comfort. Its rustic simplicity matched her house, which sat just a hundred yards down the trail. We carried her there for final preparations.

End of the Spear, by Steve Saint

Steve Saint was five years old when his father, missionary pilot Nate Saint, was speared to death by a primitive Ecuadorian tribe. In adulthood, Steve, having left Ecuador for a successful business career in the United States, never imagined making the jungle his home again. But when that same tribe asks him to help them, Steve, his wife, and their teenage children move back to the jungle.

There, Steve learns long-buried secrets about his father’s murder, confronts difficult choices, and finds himself caught between two worlds. Soon to be a major motion picture (January 2006), End of the Spear brilliantly chronicles the continuing story that first captured the world’s attention in the bestselling book, Through Gates of Splendor.