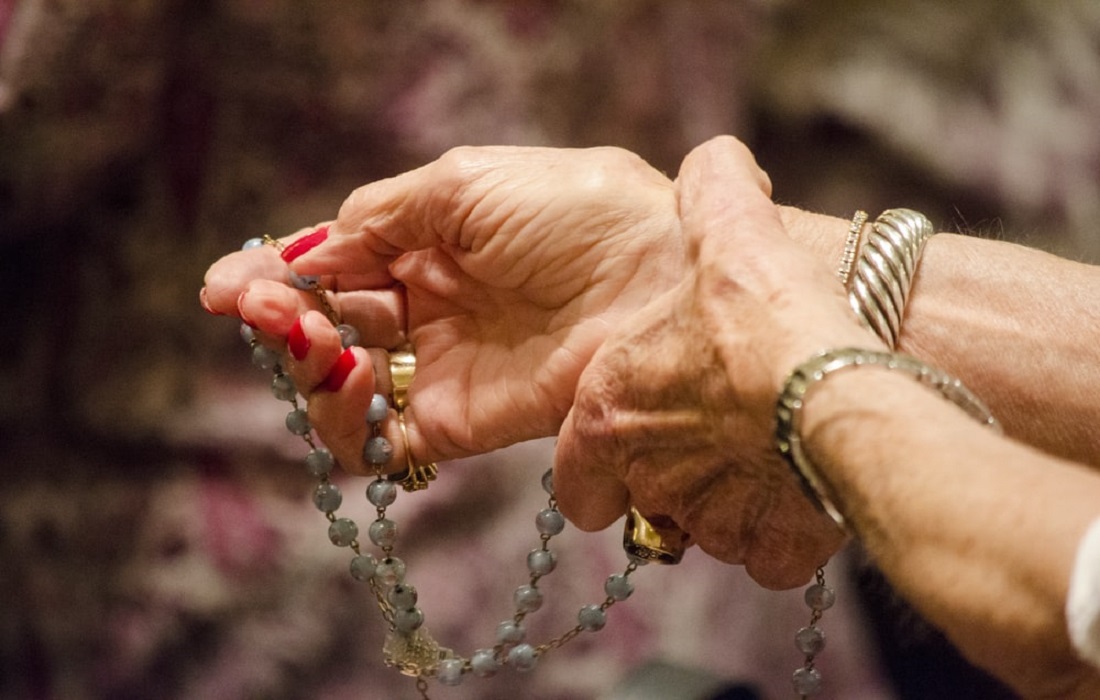 The Pro-Life Prayer of Sister Josita

“Her initial intervention for me—just a name and a face—moved celestial mountains, making way for my future legacy of life.”

By Dr. Patti Giebink, excerpted from the book Unexpected Choice

During my years of missionary travel and a lengthy conversion from pro-choice to pro-life, there was a person who prayed for me repeatedly. She was a prayer warrior I’d never met, but God heard her special prayer for me.

It was the prayer of Sister Josita.

In 1996, Sister Josita Schwab began her work at the Northridge Apartments in Sioux Falls as a Saint Joseph’s Catholic housing advocate. After nearly forty-five years of service in various communities, she accepted the appointment of a “Sister Presence” at the low-income housing complex. It was there that Josita discovered her true calling.

Sister Josita would stroll the grounds, making herself known to the people at the apartments, garnering and growing their trust. Many of them were refugees and immigrants with limited English skills. Their fear was easy to understand, since they were so far from home and all that was familiar to them. But it was the children living within those sixty units that Josita immediately connected with. It was their innocence and openness that brought their parents to confide and even rely on this woman with an abundance of grace.

The children flocked to her as she began to show movies and provide coloring books and crayons, puzzles and playground games. After a time, she initiated the first Girl Scout and Boy Scout troops in the building. Most of all, she gave the children a safe place where they could just be kids.

Her undeniable warmth eventually thawed the overly cautious parents, particularly the single mothers. Josita would drive them to appointments, help fill out paperwork, point them toward social resources, and pass along donations. Her ministry of healing and harmony affected so many lives. Along with her summer vacation Bible school, instructive newsletters with information about functions and activities, she held clothing exchanges and relentlessly collected generous donations for this, her passion project.

In the same year that Sister Josita began her work at Northridge, she read in a local Sioux Falls newspaper that a South Dakota physician was performing abortions for Planned Parenthood. That physician, Dr. Patti Giebink, stated that it was not her wish to do abortions full time, and in reading this, Sister Josita was instantly moved to hope that this was an early sign of the doctor’s possible defection from doing abortions altogether.

If this Dr. Patti is sitting on the fence, Sister Josita thought, let’s see if God can push her over.

And so, the nun with the heart of a lion, a woman I had never met, began to diligently pray for me—by name.

For ten years, Sister Josita prayed for me, until she happened to watch the national TV coverage of a vote on a South Dakota abortion issue.

A New York Times article had been published regarding the nation’s battle over abortion and the vote taking place in South Dakota.1 It described the Sioux Falls community on both sides of the issue, noting, “The battle over a statewide ballot measure to install one of the country’s strictest anti-abortion laws is playing out in television commercials, yard signs, and Sunday sermons.”

Now the South Dakota “Vote Yes” bill to ban abortions with few exceptions had national coverage, and it made its way into every corner of the media. And on that evening in 2006 while Sister Josita watched TV, she saw a television spot that more than surprised her. There was a female physician speaking up for the Right to Life movement. When the doctor’s name was mentioned, Sister Josita began to cry. God had heard her prayers—all of them, offered year after year. The doctor speaking against abortion was Patti Giebink, the woman she’d spent the last decade on her knees praying for. Obviously, God had pushed me “over the fence,” just as Sister Josita had asked Him to do.

And though the South Dakota Abortion Ban (also known as Referendum 6) appeared on the November 2006 ballot and failed, Sister Josita’s letter to me did not.

It was now December 2006 (seven months after I had attended the Christian conference in Minneapolis and confessed that I’d done abortions). I had just returned from Pakistan to a mound of mail staring at me as I wearily unpacked. That evening, I collapsed into a cushy chair with an armful of unopened envelopes. As usual, most of it was miscellaneous junk or bills. Breaking each seal with little expectation of what I might find, I came across a letter that abruptly brought my repetitious tearing and tossing to a standstill.   The letter was from a woman I didn’t know—Sister Josita Schwab. Suddenly, my eyes filled with tears that threatened to soak the paper trembling in my hand.

Dear Doctor Giebink,
May your Christmas be blessed and the New Year filled with joy.
You don’t know me. I am a Sister of the Presentation . . . I want to thank you for your courage to speak out for life, and the Referred #6 to bring an end to abortion. When I saw you on television, I was so proud of you to publicly state that you used to perform abortions for Planned Parenthood in Sioux Falls and now you support life instead.
When I first heard that you were performing abortions, I began lifting you up in prayer. I do not believe abortion is right, or a solution to an unwanted pregnancy. I have prayed for you, by name, that one day your heart would be touched, and you would discontinue performing abortions.

My eyes welled up with tears as I took in the words so lovingly written in elegant cursive pen.

I thank God for you, and I continue to pray for you that the coming year will be filled with wonderful surprises from our loving God.

I must have felt the same astonishment, joy, and humility that Sister Josita experienced when she finally saw her prayers answered. And we both praised God!

The strange thing about the TV commercial was that I was supposed to be one of several doctors in South Dakota to speak about the right to life. But because of a production debacle, I stood there alone in the announcement, declaring my position as Sister Josita watched and rejoiced.

Sister Josita still prays for me without solicitation, but especially when I ask for her prayer covering for something particular. She is truly God’s saint. Since that time, Sister Josita has retired to Aberdeen to the Presentation Sisters Convent. We write regularly, and I’ve visited her twice. She turned ninety this year, and other than mobility issues, she’s still a vibrant and dynamic warrior. Her initial intervention for me—just a name and a face—moved celestial mountains, making way for my future legacy of life.

May we all stay on our knees until the answer comes, just as Sister Josita did.

How does a pro-choice doctor who once performed abortions for Planned Parenthood wind up on the opposite side of this embattled issue? Dr. Patricia Giebink was overpowered by God’s perspective at a healing conference, becoming a pro-life advocate who repented before millions for doing abortions.

As the author tells her emotional story, you will come away with a new understanding of the complexity of life, the risks of abortion, the power of prayer, and the greatness of God’s love and forgiveness—which is big enough to cover the pain of all affected by this controversial procedure.

Unexpected Choice is told from the perspective of a doctor who actually performed abortions through Planned Parenthood. The book chronicles her journey from being a pro-choice physician to someone speaking on behalf of the pro-life movement.

Patti Giebink, M.D. is an OB/GYN physician who has over 30 years experience delivering babies here and in hospitals overseas. While working in her private practice in Sioux Falls, SD, she began working part-time performing abortions at Planned Parenthood, the only abortion clinic in South Dakota. Eventually, she closed her practice to work full-time at Planned Parenthood but left one year later in September 1997. She has not performed any abortions since.
Her book, Unexpected Choice, chronicles her career, her journey, and her transformation and gives readers insight into both sides of this divisive issue. Dr. Patti now spends her time helping people find compassion and sensitivity to those affected by abortion. Dr. Patti lives in South Dakota along the Missouri River with her cat. Her hobbies include bicycling, reading, and prairie gardening. Unexpected Choice is her first book.