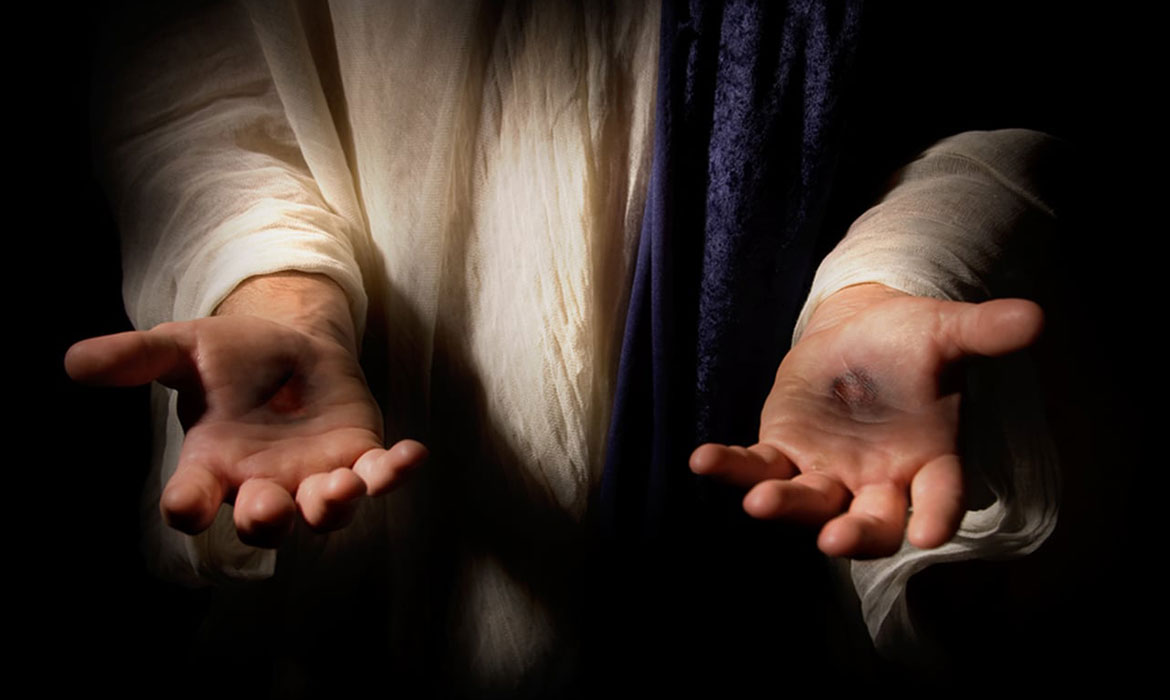 Do you remember what Jesus did when he first got back together with his disciples after his resurrection? He showed them his wounds.

It was afternoon on the very first Easter. The disciples were gathered behind locked doors, understandably confused and a bit frightened by the news that Jesus’ tomb had been found empty. “Suddenly, Jesus was standing there among them! ‘Peace be with you,’ he said. As he spoke, he showed them the wounds in his hands and his side. They were filled with joy when they saw the Lord!”

One of the disciples, Thomas, happened to be missing from the group on that occasion. As soon as they could, the others told him that they had seen Jesus risen from the dead. But Thomas was skeptical about this. (Come on, don’t pretend you wouldn’t have been!) So he said, “I won’t believe it unless I see the nail wounds in his hands, put my fingers into them, and place my hand into the wound in his side.”

Eight days later, Jesus took up the dare. When he appeared again to the disciples, he said to Thomas, “Put your finger here, and look at my hands. Put your hand into the wound in my side. Don’t be faithless any longer. Believe!”

“My Lord and my God!” Thomas exclaimed.

What else could he say?

When Jesus showed his wounds, he erased all doubt about who he was.

When Jesus showed his wounds, he removed all fear from the hearts of his disciples.

When Jesus showed the nail holes and the gash on his side from the spear, he not only proved that he was alive; he also proved that our wounds can be healed.

So if Jesus was willing to put his wounds on display as irrefutable evidence of his victory over sin and death, why are his followers so reluctant to show our wounds to others? I believe one of the reasons we’ve lost credibility in the culture today is that too many of us are unwilling to show our wounds. That leaves the people around us feeling one of three things:

When we deny, cover up, or dismiss our wounds, we also deny, cover up, and dismiss the story of our healing, and the thunderous power of the resurrection becomes a hushed whisper in our lives.

It won’t be our polished and ­cleaned-​­up lives that will convince others of the reality of God’s power. It will be our willingness to courageously follow in the footsteps of Jesus by allowing others to see our wounds—by allowing the world to see the scars we carry with us that point to the healing work of Christ in our lives.

We unlock the potential for healing in the lives of all the wounded people around us when we grit our teeth and make the tough choice to show them the wounds we’ve been handed. In the process, we all begin to heal. And we become active participants in the ­life-​­giving dynamic of God’s redemptive plan.

Excerpt from No Easy Jesus by Jason Mitchell

Many Christians share a secret. Few of us dare to speak it out loud, because doing so would feel like taking a slap at God—and it wouldn’t make us look good either. Yet this secret is affecting us painfully on the inside every single day.

Here it is: Believing in Jesus has left us disappointed.

At one point we were thrilled and hopeful about living a life of trusting in Christ. But over time our experience has failed to live up to our expectations or make the difference we thought it would. So we’ve begun to think: “This can’t be all there is to being a Christian.”

No Easy Jesus holds the key to moving forward when you’re bored, disillusioned, and beaten down by faith-as-usual. It’s a clarion challenge to wake up each day and choose Jesus all over again; to make the tough, gritty choices that align your way with His and lead to true fullness of life. Because when you decided to follow Jesus, you didn’t sign up for what was easiest—you signed up for what was best.