*Update 4/23/12: The winners of this giveaway have been notified by email. Thank you all for participating!*

Today marks the 100th anniversary of the Titanic ‘s sinking. In remembrance of that fateful day, we bring you a guest post by Cathy Gohlke , author of the poignant and powerful novel Promise Me This , which begins on the majestic Titanic . Look for your chance to win a copy of Promise Me This at the end of this post! 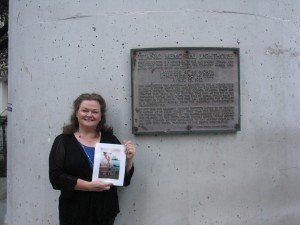 Cathy at the Titanic Memorial in NYC

I’ve long been fascinated by Titanic —the romance of the Edwardian era, the magnificent “ship of dreams,” the pre-World War I distinctions between the classes—in life and aboard ship.

But what intrigued me most was the people—the passengers and crew—those who died that fateful night, but especially those who lived.  How did they go on living, knowing that hundreds had died, screaming, around them?  How did they respond—immediately and over the years—to having received such an unmerited gift of grace?

The first time I saw a copy of the ship’s manifest I found details of a young man, Owen George Allum, a London gardener who’d sailed third class from Southampton, England—a gardener who reminded me enough of my great grandfather (who’d emigrated from England a few years before and became a gardener for a wealthy American family) to charge my imagination and make me dig deeper into history.

Later, through a Titanic exhibit, I learned that Owen had drowned. A little research led me to his family, his intended destination, even the items found in his pockets once his body was recovered and sent to Halifax. 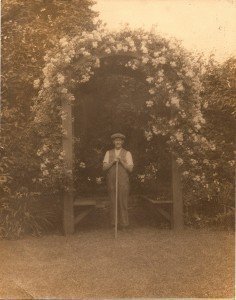 From all of this I wove a fictional short story, The Legacy of Owen Allen —a story, which after sitting many years in my desk drawer, begged a longer telling.

But the journey from short story to novel is long and requires much research.

One of my burning questions was, what was it like for those left behind—families, friends, fiancées ?  When I learned that the real Owen had had a sister, it set me to imagining what life was like for her after losing her beloved brother.  My breath caught to imagine how I would feel if I’d lost one of mine.

I traveled to London and Southampton, England, to trace the last days and hours of Titanic’s passengers and crew before they set sail. I learned that a six-week coal strike (resulting in no work or pay for crewmen or dock workers) ended just as Titanic was being outfitted.  Thankful for the prospect of work and earnings for bread, men and women of Southampton flocked to the docks to sign aboard.  As a result, nearly every family lost or knew someone who died when Titanic foundered, most often the breadwinner for a large family or aged parents.

Devastation for the people of Southampton and surrounding areas lasted years beyond April 15, 1912.  I could only try to imagine how very much they’d lost—how very much Owen’s sister lost—and I knew those stories had not been told.

Every bit of history poured into the lives of my characters—from the way the people of Southampton learned of the sinking, and belatedly of the names of survivors, to the very men who’d outfitted the ship with palms and plants before she’d sailed.

Words like “untimely death—gift—unmerited grace—sacrifice—love” all melded into a story that created an echo—a parallel—of Christ’s sacrificial love story to the world, and our response to His amazing, unmerited gift.  That story became Promise Me This. 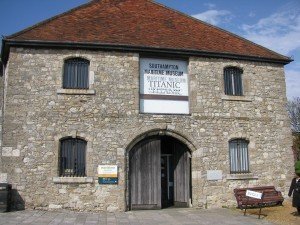 It seems fitting that Titanic ’s Centennial Anniversary—a day that marks human tragedy and consequential gifts of unmerited grace—should closely follow our celebration of  Good Friday and Easter Sunday—days that seal Christ’s redemption of fallen humanity, and usher us, not into lifeboats on a glassy sea, but into hope and eternity.

*Giveaway* We’re giving away 5 copies of Promise Me This ! To enter, please fill out the form below. Winners will be notified on Friday, April 20, 2012.