For Such a Time as This: Astronaut Drew Morgan's Wife Reflects on the Moments Before the Launch

It’s July 20, 2019. Even at 9 p.m. on the desert steppe of Kazakhstan, it is still close to 100 degrees outside. My stomach has a knot in it that won’t go away, and the bumpy ride across the old Soviet-era roads of the Baikonur Cosmodrome hasn’t helped. The four kids and I tumble out of the van and look around, taking in the bizarre, celebratory scene in front of us.

Hundreds of people are milling about, most of them speaking languages I don’t know. I turn and smile at my oldest child, Daniel, who is quietly taking it all in. Twelve-year-old Amelia is scanning the crowd for one of her besties, another astronaut’s daughter whose dad is also strapped into the rocket we can see in the distance. Sophia, my athletic ten-year-old, is bouncing with excitement as she grabs my hand. “Can we swim in the hotel pool again tonight, Mom?”

Sure, honey. Just as soon as we launch your father into space. “We’ll see,” I say as I put my free arm around Gabriella. At only eight, she has the most questions and worries about her dad leaving.

I can hear the reporters speaking into their cameras in preparation for the launch that will begin in less than thirty minutes. One voice in particular cuts through the night. It’s a British reporter who is recounting everything that unfolded earlier in the day, with specific emphasis on one of the families she had observed: “And then the children—hoisted up on the shoulders of family and friends—reached out their hands for one last wave, one last touch through the bus windows, one last ‘I love you’ before the bus with their father and his fellow crewmates pulled away to the launchpad where their Soyuz rocket waits.” 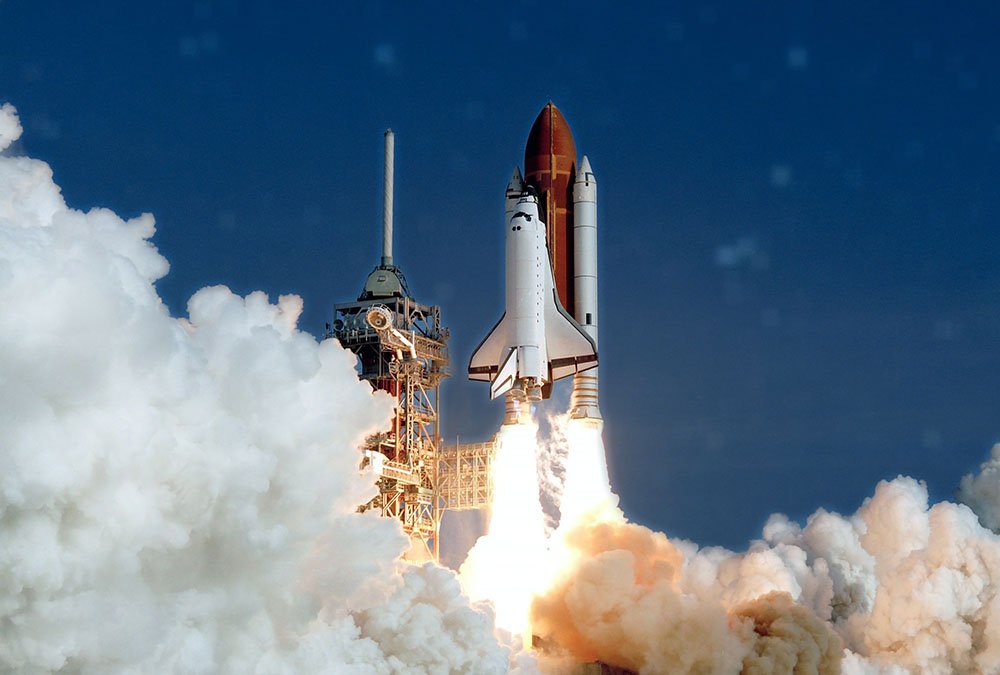 She doesn’t know that the very family she’s telling the world about is standing within earshot.

Behind her, at least half a dozen other reporters are doing similar reporting in Spanish, Italian, and Russian voices. It’s as if I’ve stepped onto a movie set, and we’re almost at the climactic scene where the international press will report to the world whether or not the daring and dangerous Earth-saving mission has been successful.

My NASA escort gently encourages me to move toward the middle of our small section of the field for the best view. He peers at his watch and tells me, “Less than ten minutes until launch.” The knot in my stomach grows tighter.

My kids are wandering around, talking to the grandparents, uncles, and friends we brought with us on this epic pilgrimage. I call to them, and they head in my direction, kicking the dusty ground as they walk. My mom is already beside me, while my in-laws stand with Drew’s two brothers, nervously chatting and checking their watches and cameras.

“We need to stay together now,” I tell the kids. My voice sounds deep and solemn, even to my own ears. Whether they understand the gravity of the situation or know I’m serious by my tone of voice, I hear none of the usual complaining that comes when told to hold hands with a sibling. My escort hovers behind me at a respectful distance, ready if I need him.

“Two minutes out,” he tells me. There are no blaring announcements over a loudspeaker or giant digital countdown clocks like spectators had at the Florida shuttle launches. We just look at our own watches and phones in the dark, knowing that the Russian ground crew will ignite the rocket at exactly 9:28 p.m., not a minute earlier or later.

My fingers tingle as I grip a small, sweaty hand with each of mine; my breathing is shallow and rapid. I take a deep breath to help center myself. If I didn’t have the children there with me, I might be tempted to sink to the ground and let the intense feelings of anxiety overwhelm me. But as I glance down to check my own watch, I catch a glimpse of the tattoo peeking out from behind my watchband. It is brand-new, inked only three weeks before. The fancy, slanted script reads “Esther 4:14,” a reference to an Old Testament Bible verse that has always spoken to me, but never more than in this moment.

My tattoo references the point in the story when Queen Esther is at a crossroads. Her uncle has told her of a plot to kill their people, the Jews, and he’s asking her to do something. The verse inked on my wrist is her uncle’s response when he senses her hesitation: “Who knows whether you have not come to the kingdom for such a time as this?” (Esther 4:14, esv).

God placed Esther into a moment of history for a specific purpose, but he gave her the choice of how to respond. Would she choose the path dictated by fear and do nothing? Or would Esther choose the path paved in hope, willing to act and face her fears, confident that God would use the situation, regardless of the outcome, for his greater purpose? Either way, she knew her life would change dramatically, and her decision could prove fatal. Spoiler: Esther decided to step up like a complete boss and declare, “If I perish, I perish” (Esther 4:16, esv). Man, I wish I had guts like Esther. 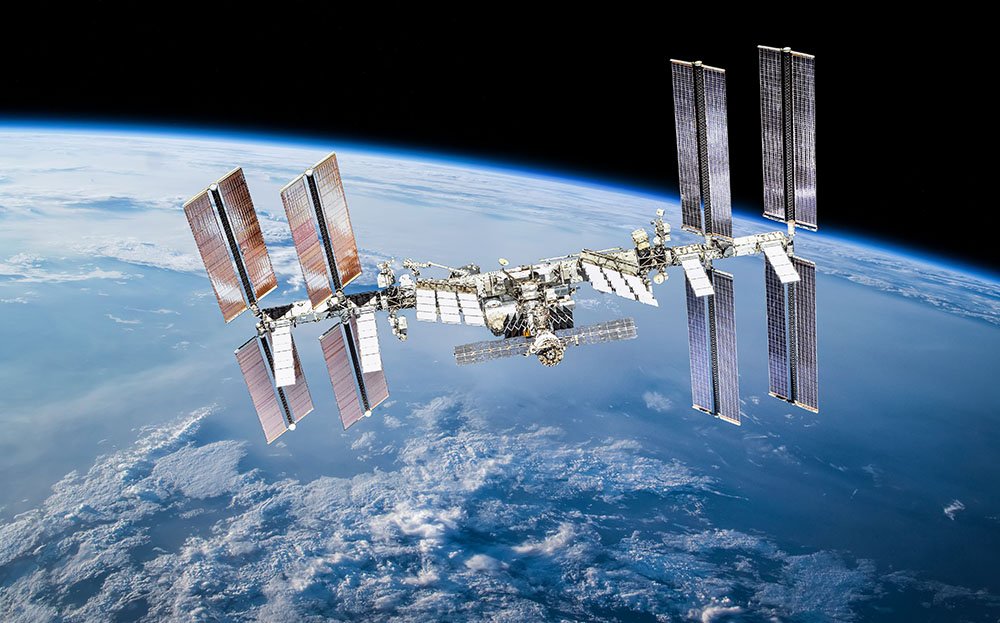 Though standing in a hot, dry field on the opposite side of the world waiting for the one-minute countdown to begin pales in comparison to the life-or-death decision this biblical queen faced, in this moment, in my soul, I am Esther. My mind is filled with unanswerable questions, as I imagine Esther’s was. What if something goes wrong? What if the rocket explodes? Have I just said goodbye forever to my husband of twenty years? What if something happens while he’s gone and he can’t come home? Will I be able to handle all the logistics and emotional burden of raising four children on my own? Even with years of training and full confidence in the equipment and technology, things happen, mistakes are made. On the flip side, even if everything goes perfectly, what comes next? What will life be like with Drew in space and us back here on Earth? Will our relationship suffer? Do I have the skills, support, and endurance I will need for this marathon mission? I am standing on the edge of a psychological cliff, my toes dangling off the edge, not knowing if in a few short moments I will be filled with the elation of a successful rocket launch or the shocking downward plunge of mourning the loss of my best friend and my children’s father. My fear and uncertainty are palpable as I stand at this crossroads, and my heart is pounding like a drum. No matter which way this launch goes, I know that my life, and the lives of my children, will never be the same. Both outcomes are filled with uncertainty and unknowns, the fear of which far outweighs my fear of the rocket launch itself.

“Thirty seconds,” a voice calls out from the darkness behind me. We can see the support structures beginning to move on the launchpad.

Whatever happens next, we will choose the path of hope and together face whatever comes next. After all, the fear in my heart is heavy and tight, but it is not unfamiliar.

Adapted from The Astronaut’s Wife: How Launching My Husband into Outer Space Changed the Way I Live on Earth by Stacey Morgan, releasing from Tyndale House Publishers in February, 2022.