The Legacy of Billy Graham on Tyndale House

Billy Graham was a quiet man of God, but he was also a visionary. He led hundreds of thousands to a personal faith in God. His books influenced millions. Many ministries can point to ways in which their work was deeply influenced by Mr. Graham. That is certainly true for us at Tyndale House Publishers. When Tyndale House was still a kitchen-table operation, Mr. Graham began to promote  Living Letters  , the first part of   what eventually became  The Living Bible  . The Billy Graham Evangelistic Association gave away millions of copies of  Living Letters  and the subsequent books in that series. And when Mr. Graham insisted on paying Tyndale House a royalty for the copies that were given away, Ken Taylor, the founder of Tyndale House, used that royalty check to start Tyndale House Foundation. Mr. Graham was criticized for encouraging people to read a paraphrase of the New Testament, but he recognized the value of a translation that reads “like today’s newspaper.” We thank God for the life and ministry of Billy Graham. 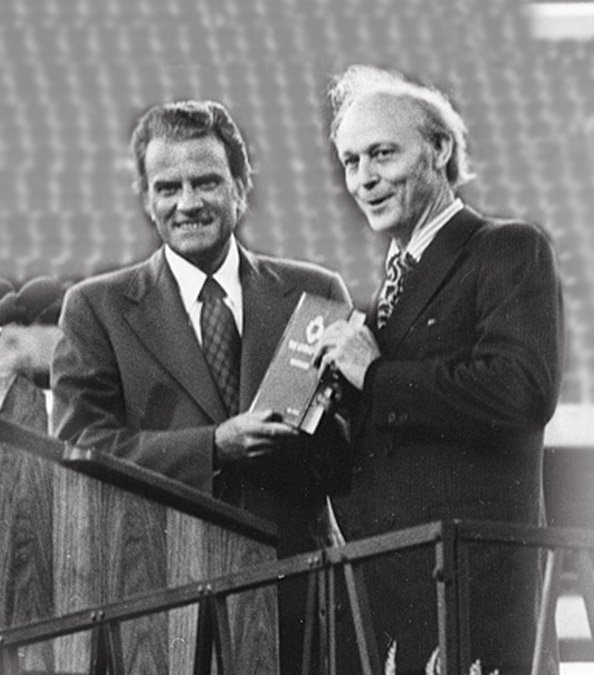 Pictured above is Kenneth Taylor handing Billy Graham the 1st copy of  The Living Bible  .

Below is an excerpt from the book,   My Life: A Guided Tour,  by Tyndale’s founder, Kenneth Taylor.

One day that spring a representative from Billy Graham’s headquarters came to my office at Moody with the incredibly exciting news that Billy Graham wanted to give a free copy of  Living Letters  to anyone in his television audience who asked for one. Would I be willing? Would I! Nothing could have pleased me more. The whole idea behind the long years of preparing the new translation was to reach out as widely as possible, and here was an obviously Godgiven opportunity. They estimated they would need fifty thousand copies!

Dr. Graham’s decision to use  Living Letters  as a TV giveaway was a bold step. He had never before given a book as a premium to viewers, so it must have been a step of faith for his organization to give away thousands of  Living Letters  .

They asked how much royalty I would require. The answer was easy: none! But Dr. Graham insisted that there be some royalty, so we agreed on five cents per copy.

That fall Billy Graham began his giveaway program. I remember one humorous sidelight. A few weeks after the 50,000 books were printed, I received a telephone call from George Wilson, business manager of the Billy Graham Evangelistic Association. He reminded me of my agreement that the Graham organization could print 50,000 copies. His call alarmed me for a moment; I wondered if they had overprinted and wanted to send some back. But the problem was just the opposite. They had reprinted the book several times, eventually reaching 600,000 copies and hadn’t technically received permission for more than the first 50,000. So, could they have permission now? Naturally, I was delighted to give it!

What a wonderful experience it was for all of us to see how the response to Dr. Graham’s offer literally sowed the nation with the paraphrased Epistles.