Francine Rivers’ NYT Bestseller The Masterpiece features a successful LA artist, Roman Velasco, who appears to have everything he could possibly want—money, women, fame. Still, he wrestles with demons from his past by tagging buildings as “the Bird,” a notorious but unidentified graffiti artist—an alter ego that could destroy his career… Then Grace Moore, his new and reluctant personal assistant, shows up on his doorstep, setting in motion a chain of events that will change both their lives forever.

In the process of writing The Masterpiece, Francine came across the work of Cameron Moberg, a renowned LA graffiti artist who has little in common with her character Roman other than his love for and skill with spray paint. The artwork featured on the cover of Francine’s book is from one of Cameron’s graffiti works located in San Francisco called “Time Flies.” Cameron was gracious enough to meet with Francine so she could do a little research and sharpen her painting talents with a few graffiti lessons. 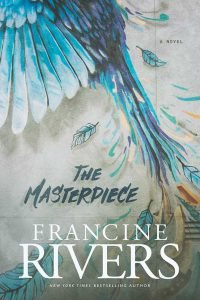