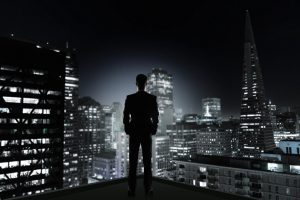 What do Marcus Ryker and James Bond have in common? Not much actually. Ryker is American, while Bond is British. Ryker prefers a paid-for if beat-up 1986 Nissan Stanza to a flashy Aston Martin. He prefers strong coffee to a martini, regardless of whether it’s shaken or stirred. Bond is a ladies’ man. Ryker is a family man. Bond is trained to hunt. Ryker is trained to protect.

Yet despite all these differences, there is one area in which the two are alike. They both have found themselves in a battle to take down a fictitious terrorist organization.

When the Marcus Ryker series was still in its conceptual phase, I knew that if he were to be a great protagonist, he would need to face off against a strong antagonist who could match up against his skills. In the first few novels in the series, Ryker encounters a range of real-life bad guys in Russia, North Korea, Iran, and among Iran’s terrorist proxies like Hezbollah. But as much as I want my novels to feel ripped from tomorrow’s headlines, I knew I had to be careful. The world can change very rapidly, and I didn’t want to get stuck in a literary cul-de-sac from which I could not escape. I needed, therefore, an enemy that I could design myself, one that would give me freedom of movement regardless of how real life played out.

This situation led me to look back to my James Bond roots from when I was a kid. I remembered that Ian Fleming created a fictional terrorist organization called Spectre. Yes, he was dealing with the reality of the Soviet Union and the Cold War. But rather than being completely dependent on current events and global powers, Fleming created a terrorist organization he could fully manipulate, one that was immune to what was really happening in the world. Although Spectre was part of the James Bond movies from the very beginning when 1962’s Dr. No was released, it actually didn’t appear in print until 1961 when the ninth Bond novel, Thunderball, was published. The fact that over half a century later, a Bond movie, the twenty-fourth in the series, was released with the title Spectre shows that Fleming’s decision to create his bad guys from scratch was a sound one.

After the first few novels, therefore, I decided to pit Ryker against a terrorist organization of my own creation, which calls itself Kairos, though this is not its real name, just one to throw the CIA and other intelligence agencies off its trail. This allowed me to mold my story lines to global events and Epicenter trends, without being tied to day-by-day reality. It’s been fun to create an international terror organization from scratch—fictionally speaking, of course—and to have Marcus and his colleagues pursue Abu Nakba and its other leaders from book to book.

How long will this story line play out? No comment, my friends. You’ll have to keep reading to find out.