This collection bundles together all 4 of the Four Seasons novels by popular authors Catherine Palmer and Gary Chapman into one e-book for a great value! The series is based on the marriage principles found in Gary Chapman’s non-fiction book The Four Seasons of Marriage. Similar in tone and light-hearted, quirky humor as Jan Karon’s Mitford series, Fannie Flagg’s books or Steel Magnolias. Each book has a study guide that talks about the four seasons of marriage and the healing strategies depicted in that volume’s story.

#1: It Happens Every Spring
Meet the characters that live, work, dream, and love in the community of Deepwater Cove. Four married couples, all in different stages in life, experience the joys and hardships of marriage as examined in Gary Chapman’s The Four Seasons of Marriage. In book one, Steve and Brenda face a common problem among middle-age couples: empty nest syndrome. Steve works too much, and with their two children out of the house, Brenda feels lonely and unfulfilled. In order to save their marriage, the two must learn to reconnect. Readers are also introduced to many charming characters, like Cody, the mentally challenged homeless man that shows up on Steve and Brenda’s porch; Pete, who owns the Rods ’N’ Ends tackle shop; and Patsy Pringle, who owns the Just As I Am beauty parlor, where much of the action takes place.

#2: Summer Breeze
Readers meet the blended family of Derek and Kim Finley. Kim has a set of twins—one boy and one girl—from her first marriage; Luke has recently been diagnosed with diabetes, and Lydia is acting out as a result of the attention now being showered on Luke. To complicate matters, Derek’s overbearing mother comes to live with them. With all that’s going on in their lives, Kim and Derek’s communication begins to break down and their marriage slowly moves into winter. Although the second book will focus on Kim and Derek, readers will also encounter all their favorite characters—Patsy Pringle, Pete Roberts, Steve and Brenda, Esther and Charlie—as well as some new ones, like the proprietor of the new sandwich shop that’s moved in next to Patsy’s beauty parlor.

#3 Falling for You Again
Charlie and Esther Moore have been married nearly fifty years when the contented life they’ve built together begins to crumble. Esther has been forgetful recently, but it’s rarely a problem until the day she puts her car in drive instead of reverse, flying off the end of the carport and into the backyard. Esther’s accident and declining health shatter their reverie, and the couple must come to terms with all the paths their lives have not taken if they ever hope to pull their marriage out of winter. As always, the quirky characters of Deepwater Cove will pop in and out of the story and delight readers.

#4: Winter Turns to Spring
Brad and Ashley Hanes are young newlyweds who are facing their first season of winter. Opposite work schedules, differing views on finances and when to start a family, and Brad’s selfish and immature habits are forcing the young couple apart, causing them to question why they ever got married in the first place. It will take a whole lot of help—mostly from their nosy but well-meaning neighbors—for Ashley and Brad to pull their marriage out of the winter blues and into a hopeful spring. As usual, the residents of Deepwater Cove will pop in and out of the story to delight readers. They’ll encounter Cody and see his continued independence and growing friendship with Jennifer; Patsy and Pete’s escalating romance; and Charlie, a recent widower who is taking on the challenges and excitement of his golden years with zeal. 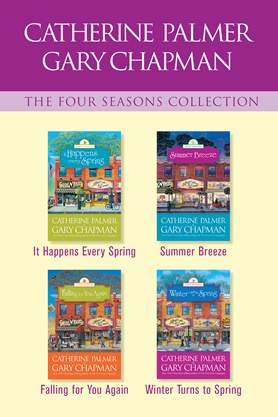