I didn’t expect to be writing an email that morning. With three children under five, I wanted, and needed, to spend my daytime hours savoring the simple, rich delights of my ­kids—​­and getting in a few hours of my own work whenever I could. My husband, Jacob, was a ­full-​­time graduate student and held down a job, so he was rarely home before dinner.

That morning, looking for the grocery list I’d typed up the night before, I logged into my laptop. As it happens, I had left my Facebook tab open. That’s when I saw ­it—​­a trending news story posted just a few hours earlier: “A Blind Eye to Sex Abuse: How USA Gymnastics Failed to Report Cases.”

There’s a shocker, I thought. My husband and I had been appealing to church leaders over a similar issue involving another church they had been supporting, and the wound felt very fresh. I glanced around to make sure my ­five-​­year-​­old son, already a fluent reader, was nowhere nearby, and I clicked the link. What I read filled me with a grief I can’t express: USA Gymnastics had been systematically burying reports of sexual mis­conduct in a filing ­cabinet—​­complaints about ­fifty-​­four member coaches over ten ­years—​­and some of those coaches had gone on to abuse little girls for years.1 I wanted to cry. I knew all too well what those precious children had endured.

At the bottom of the article was this notice: “IndyStar will continue to investigate this topic.” The reporters had provided an email address where readers could send tips. My stomach turned. At that moment I was certain of two things.

First, I was right. The United States of America Gymnastics (USAG) had been burying sexual abuse cases to save face. If they protected their coaches, I’d reasoned, they absolutely would have protected him. They would never have listened to me.

And second, this was the moment for which I had been waiting and watching for nearly sixteen years. Someone had blown the whistle on how USAG handled sex abuse. That meant someone had spoken up. More important, that person had been believed. And the article was trending. That meant the public was paying attention.

Right then and there, with my teething baby bundled on my back, I broke my steadfast rule about emailing during the day. As I bounced back and forth to keep baby Ellianna calm, I typed:

I am emailing to report an incident. . . . I was not molested by my coach, but I was molested by Dr. Larry Nassar, the team doctor for USAG. I was fifteen years old.

I paused for a second. I knew exactly what it would mean for me and my family if the IndyStar team decided to pick up the story. I’d known for years what the cost would be. But it had to be done, and if it wasn’t done now, it might never happen.

I have the medical records showing my treatment. . . . They are in a file cabinet at my parents’ house, which is several hours away.

I knew my evidence was scant, but I could tell by the way the IndyStar investigation had been done that these reporters understood the dynamics of sexual assault, what evidence looks like, and what patterns are often in place. They had seen the dark underbelly of USAG because they had believed the survivors of the coaches’ abuse. Still . . . I knew what it felt like to speak up and be dismissed.

I did not ever report Nassar to anyone, except my own coach, some years later. . . . I was told not to tell the owner of the gym . . . it would come back on me. I decided against going to the police . . . it was my word against his. . . . I was confident I would not be believed.

I looked around my kitchen. We’d barely finished breakfast, and I was writing an email ­that—​­if it did what I needed it to ­do—​­would completely upend our lives. I gave myself a mental shake, firmly pushed down the fear and nausea, and typed two final sentences:

I have seen little hope that any light would be shed by coming forward, so I have remained quiet. If there is a possibility that is changing, I will come forward as publicly as necessary.

Then I hit Send.

This is an excerpt from Rachael Denhollander’s book, What is a Girl Worth? 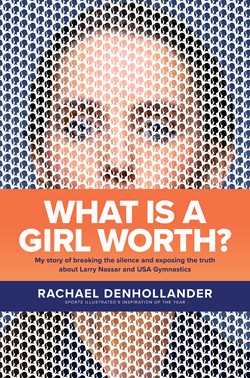 Written by Rachael Denhollander, recipient of Sports Illustrated’s Inspiration of the Year Award and one of Time’s 100 Most Influential People (2018)

Rachael Denhollander’s voice was heard around the world when she spoke out to end the most shocking US gymnastics scandal in history. The first victim to publicly accuse Larry Nassar, the former USA Gymnastics team doctor who sexually abused hundreds of young athletes, Rachael now reveals her full story for the first time. How did Nassar get away with it for so long? How did Rachael and the other survivors finally stop him and bring him to justice? And how can we protect the vulnerable in our own families, churches, and communities?

What Is a Girl Worth? is the inspiring true story of Rachael’s journey from an idealistic young gymnast to a strong and determined woman who found the courage to raise her voice against evil, even when she thought the world might not listen. In this crucial cultural moment of #metoo and #churchtoo, this deeply personal and compelling narrative shines a spotlight on the physical and emotional impact of abuse, why so many survivors are reluctant to speak out, what it means to be believed, the extraordinary power of faith and forgiveness, and how we can learn to do what’s right in the moments that matter most.

Published by Tyndale, this inspirational, empowering book is available in both hardcover and e-book editions.