The Trinity is one of the most central doctrines in Christianity, one of the tenets that is completely unique to to the Christian faith. This glossy, full color Trinity Pamphlet explains the Trinity in clear easy-to-understand terms and illustrations. This basic booklet with a simple explanation of the Trinity also answers 6 common misunderstandings about the God the Father, Son, and Holy Spirit. This is a perfect basic Trinity Bible study for those wishing to understand their faith and defend the Trinity.

How To Explain the Trinity: The Trinity Defined

The Trinity is one of the great mysteries of the Faith. Defining the Trinity is both simple and complex: God is One, yet God exists in 3 Persons: Father, Son and Holy Spirit. It is a biblical concept that goes beyond the human understanding. This Trinity pamphlet gives a basic explanation and definition of this important Christian belief.

This Trinity explanation also answers 6 key misunderstandings about God. For example, Jehovah's Witnesses do not believe in the Trinity. They point out Bible verses that appear to contradict the Christian belief in the Trinity. But their interpretation is incorrect. This easy-to-use Trinity booklet presents compelling evidence of a Triune God and defense of the Trinity doctrine. This booklet is useful for a Trinity Bible Study, Sunday school lesson, homeschool curriculum, or evangelism.

Christian Beliefs and Church History Explained in the Trinity Pamphlet

The Trinity pamphlet helps believers know what they believe and why they believe this critical Christian doctrine. In 12-panels of rich, well-research information, the pamphlet addresses topics such as–

Church History and the Doctrine of the Trinity

6 Misunderstandings and Misinterpretations about the Trinity

The Christian Creeds and the Trinity

One of the most powerful charts on the Trinity Pamphlet shows that God and Jesus Christ share 10 key traits that are mentioned in the Old Testament as applying to no-one but God. Another Trinity chart shows seven Divine attributes shared by Father, Son and Holy Spirit with Scripture references for each.

Reviews for The Trinity Pamphlet

"Rose Publishing has a an excellent fold–out pamphlet on the Trinity that is lay–friendly and deals with cultic objections to the doctrine. HIGHLY recommended."
Paul Carden, Executive Director, The Centers for Apologetic Research 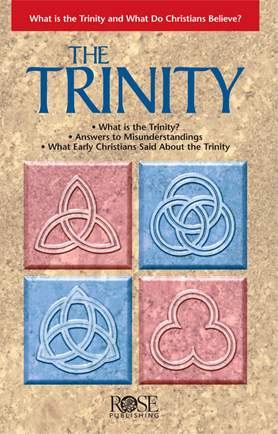