The complete 4-book bestselling Christian fiction series that has sold over 1.3 million copies!

This collection bundles all four of Karen Kingsbury’s Sunrise series in a single, value-priced e-book! Enjoy this third installment of the beloved Baxter Family Drama from the #1 New York Times bestselling author of “heart-tugging and emotional” (Romantic Times) life-changing fiction.

#1 Sunrise
In preparation for their long-awaited wedding, Dayne Matthews and Katy Hart are determined to keep the ceremony a secret from the paparazzi, but in the end it takes the help of the Baxter family and many of the CKT kids to even have a chance at a private wedding. John Baxter is thrilled that his oldest son will be settling down a few miles away, but he isn’t sure how any of his kids will handle the feelings he is having for his friend Elaine. In the meantime, the Flanigan family is struggling with their young boarder, Cody Coleman, who fights for his life following an alcohol overdose. Only God’s grace and a miracle can bring him back from the brink of death—physically and spiritually.

#2 Summer
Hollywood actor Dayne Matthews and Katy Hart are married and living in Bloomington, Indiana, where Dayne has found a solution to his on-camera love scenes—he wants Katy to star in his next film. Katy wins the part, and the couple also agrees to a 12-episode reality show. Soon, they feel cracks around the edges of their marriage and face the end of everything that truly matters to them. The Baxter family learns that Ashley and Kari are both pregnant, but an ultrasound reveals that something is wrong with one of the babies. As the summer progresses, the sisters pray for a miracle while trying to face the unthinkable. Bailey Flanigan struggles to find her way amid the turmoil of adolescence. Her friendship with Cody Coleman continues to blossom after his graduation. But when Cody decides to enlist in the Army, he’ll have to say good-bye to the family he’s come to love and the girl he’ll never forget.

#3 Someday
Pressures of the celebrity lifestyle weigh heavily on Dayne and Katy Matthews as they take on separate movie projects. Tabloid rumors talk of trouble and unfaithfulness between the two, but finally something drastic catches Dayne’s attention and makes him realize the destruction they’re playing with. But will it be too late? Meanwhile, John Baxter takes the next step in his growing relationship with Elaine, giving him a season to contemplate selling the Baxter house. As the rest of the family considers the future and what may lie ahead, they must pull together like never before.

#4 Sunset
As John Baxter makes plans to marry Elaine, one of the Baxters enters into the most trying season of all. During a time of renewed love and hope for the future, the Baxters come together to establish the sacred ground of marriage and to chart a course for the future. Memories of times gone by meet with the changes of today in a story that proves only the support of faith and family can take a person into the sunset years of life. 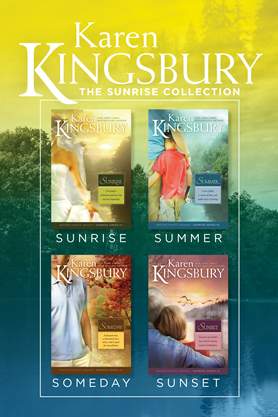