The classic interlinear New Testament, updated for the 21st century

The New Greek / English Interlinear New Testament makes this Greek text accessible to a wide spectrum of readers. It will help beginning Greek students to gain a sense of the structure and vocabulary of the Greek New Testament and provide support for former Greek students as they recall their Greek knowledge. It can also help those who have very little knowledge of Greek but who want a basic, word-for-word translation of the Greek New Testament. The text of the NRSV set in parallel provides readers with examples and insights for translating challenging passages into modern English.

Jonathan W. Bryant, MDiv, is a PhD candidate in New Testament and Early Christianity at Loyola University Chicago. He is also an editor of Bibles and Bible reference works at Tyndale House Publishers. Jon lives in Wheaton, Illinois, with his wife, Sharon, and three children. 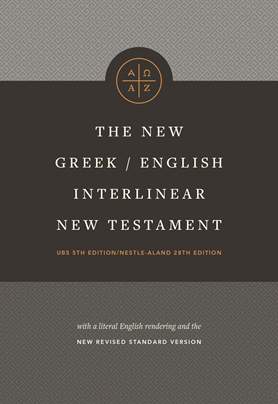