The classic story as you’ve never heard it before!
Experience Charles Dickens’ timeless tale of one orphan boy and the lives he impacted

Oliver Twist should not have survived his difficult beginnings. Cruel and oppressive forces worked against him at every turn. Yet a persistent hope gave him the courage to pursue the truth of his life. Faithfully retold in this powerful full-cast audio production, Oliver Twist captures the compassion, corruption, and redemption of Oliver’s world in 19th century England— and gives it a fresh relevance to our world today.

5 CDs + 1 DVD
Includes Bonus DVD Dramatization based on Oliver Twist by Charles Dickens, which was first published as a book in 1838. 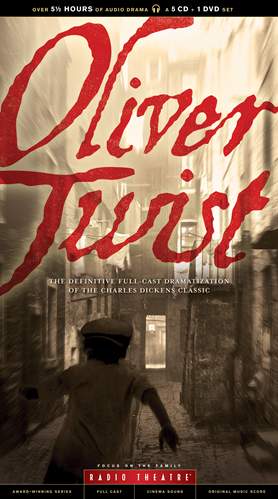