Learn to Forgive, to Break from Bitterness, and to Remove Resentment
“I forgive you.” These three little words are so simple, so complex, and yet so powerful! Forgiveness gives us permission to let go of recent irritation, bitterness, long−held grudges from minor offenses, and festering hurts that keep us up at night. Relationships filled with resentment and bitterness ultimately perish. Relationships filled with forgiveness ultimately prevail. Learn how you can be an expression of God’s grace by forgiving others and find the freedom He intended you to have.

The last section titled, “Steps to Solution,” gives you practical advice on how to have a heart of forgiveness with:Forgiveness will shed light on the characteristics of an unforgiving heart and the high cost of unforgiveness versus the high reward of forgiveness. Read the captivating story of how Corrie Ten Boom, a woman who survived a Nazi concentration camp, forgave one of her prison guards. Losing her father and sister to that same concentration camp made forgiving this man very hard, for it was only by the grace of God that helped her choose to forgive rather than to be entrapped in bitterness.

Look for more titles in the Hope for the Heart series. These minibooks are for people who seek freedom from codependency, anger, conflict, verbal and emotional abuse, depression, or other problems. 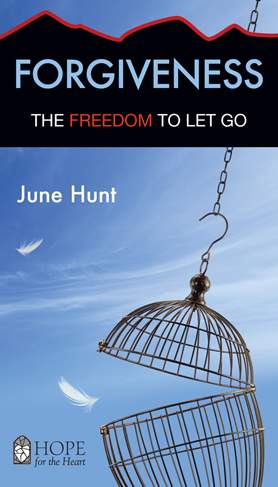