Today we celebrate Dr. Martin Luther King, Jr. Day in remembrance of King’s nonviolent activism in the Civil Rights Movement. President Ronald Reagan signed the holiday into law in 1983, and it was first observed three years later. The holiday was officially observed in all 50 states for the first time in 2000.1

On Sunday, September 15, 1963, four members of the Ku Klux Klan planted at least 15 sticks of dynamite attached to a timing device beneath the front steps of the African-American Sixteenth Street Baptist Church in Birmingham, Alabama as an act of white supremacist terrorism.

The explosion killed four girls and injured 22 others.

Dr. Martin Luther King, Jr. described is as “one of the most vicious and tragic crimes ever perpetrated against humanity”.2

Fifteen-year-old Carolyn McKinstry was just a few feet away when the Klan-planted bomb. It was one of the seminal moments in the Civil Rights movement, a sad day in American history, and the turning point in a young girl’s life.

While the World Watched is a poignant and gripping eyewitness account of what it was like to grow up in the Jim Crow South—from the bombings, riots, and assassinations to the historic marches and triumphs that characterized the Civil Rights era.

Writing her story over 50 years later, McKinstry explains, “For five decades now, I have tried to forget the deaths, the inhumane injustices, the vicious German shepherds, the fierce blast of the water hoses, and the brutal assassinations of those who spoke out for change. But now, as I see new generations coming and old generations passing, I feel compelled to write down in permanent ink my eyewitness account of exactly what happened.”

The book also includes a letter from President Barack Obama written to the Sixteenth Street Baptist Church for the 45th anniversary of the bombing on September 15, 2008.

While the World Watched is a uniquely moving exploration of how racial relations have evolved over the past five decades and an incredible testament to how far we’ve come, and how far we have yet to go. 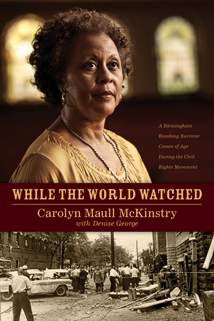 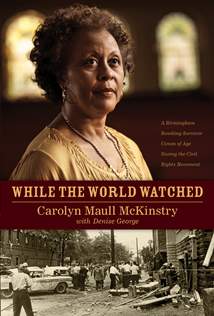 While the World Watched
by Carolyn McKinstry
$14.99
Price May Vary by Retailer
E-book
Softcover
Details