Born and raised just outside Buffalo, New York, Jill Marie Kelly is the wife of retired Buffalo Bills quarterback and Pro Football Hall of Fame inductee Jim Kelly. The couple have four dogs and three children, Erin, Hunter (who passed away in 2005 at the age of eight), and Camryn.

In June 1997, just four months after their son, Hunter, was born, he was diagnosed with a fatal genetic disease called Krabbe leukodystrophy. In response to Hunter's diagnosis, Jim and Jill established the Hunter's Hope Foundation to help children and families affected by similar illnesses. As chairman of the board of Hunter's Hope, Jill has impacted the lives of countless children who suffer from leukodystrophy by raising awareness and research funds to combat these catastrophic diseases.

Jim and Jill were radically changed by their son's illness. Young Hunter's unbreakable spirit, boundless courage, and silent valor far surpassed any of his father's achievements on the gridiron. And though he never spoke a word, Hunter was able to lead his family through the perilous maze of fame and fortune to a storehouse of true riches that no amount of money, influence, or renown could obtain. Jill's devastation over her son's illness also led her to discover the love, forgiveness, and grace of God in Jesus Christ.

Jim and Jill have shared Hunter's story all over the world, appearing on many top-rated national television networks and programs, including ESPN, Today, Good Morning America, Fox & Friends, Kathie Lee & Hoda, The 700 Club, and more. They have also appeared on countless radio shows and been featured in nationally distributed magazines, newspapers, blogs, and social media outlets. Jill was a cohost for five years on A Different View, a weekly program that aired on the celebrated TCT Network; was a featured columnist for The Word; and was one of the keynote speakers on the Women of Joy Tour.

Jill has been writing for more than twenty years. Her portfolio includes two highly acclaimed prayer books, Prayers for Those Who Grieve and Prayers of Hope for the Brokenhearted; a monthly column for The Word; and a self-published inspirational anthology called Messages of Hope, a fund-raising endeavor for the Hunter's Hope Foundation. In addition, her memoir, Without a Word,the story of Hunter's profound and poignant life, was a New York Times bestseller. Jill has penned or collaborated on several other literary projects. She and her daughters, Camryn and Erin, authored a series of books for tween girls titled Hot Chocolate with God. She wrote Kelly Tough, a New York Times bestseller, with her daughter Erin. They wrote this inspirational book about God's immeasurable strength after Jim's battle with cancer. Because of her enthusiasm and passion for God, His Word, and His people, Jill is also a prolific communicator and much sought-after event speaker.

All Products From Jill Kelly 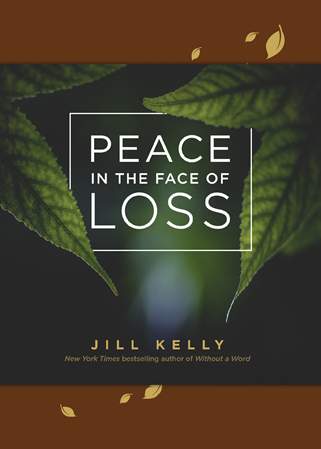 Peace in the Face of Loss