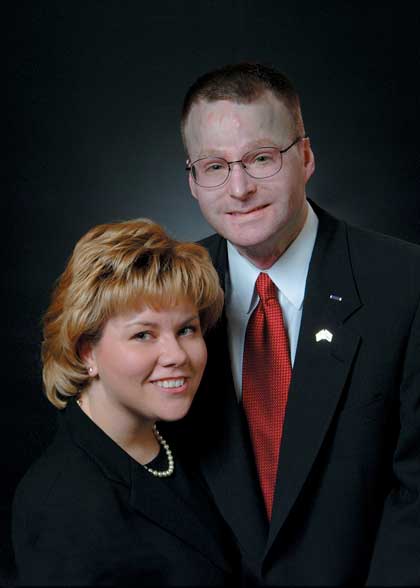 Lt. Col. Brian Birdwell is a survivor of the terrorist attack on the Pentagon on September 11, 2001. After American Airlines Flight 77 crashed into the Pentagon, just yards away from his second floor office, Brian was thrown to the ground and engulfed in flames. Of the burns that consumed 60 percent of his body, nearly half were third-degree burns. After having undergone more than 30 operations and months of multiple skin grafts, burn treatments, and therapy sessions, Birdwell has made a remarkable recovery. Despite some physical limitations, he testifies not only to his physical healing, but also to his spiritual healing—the ultimate miracle of grace.

Lt. Col. Brian D. Birdwell is a native of Fort Worth, Texas, and a 1984 graduate of Lamar University in Beaumont, Texas. Graduating as the Distinguished Military Graduate through the Army ROTC, he began his service in the United States Army at Ft. Sill, Oklahoma. After subsequently serving in South Korea for 18 months, Brian returned to the states and met his future wife, Mel. In 1990, they traveled to their new station in Kitzingen, Germany. While in Germany, Birdwell was deployed for Operation Desert Shield/Desert Storm and earned the Bronze Star for his action in the Gulf War. In 1996, while assigned to duty at Fort Leavenworth, Kansas, he completed his master's degree at the University of Missouri. In 1998, while stationed at Fort Lewis, Washington, he was deployed to Central America to help lead the Joint Task Force in support of relief operations in the aftermath of Hurricane Mitch. At the time of the attack, Brian was serving on the Department of the Army staff at the Pentagon as the Executive Officer to the Deputy Assistant Chief of Staff for Installation Management. He was awarded the Purple Heart for wounds received on September 11, 2001. He continued to serve in the office of the Assistant Chief of Staff for Installation Management and retired from active service on July 1, 2004.

Birdwell is married to Melva Collins of Davis, Oklahoma. They have a 14-year-old son, Matthew, and a golden retriever, Hayley. They currently reside in Manassas, Virginia.

All Products From Brian Birdwell