When Jeff Hilliard purchased a T-shirt cannon, he thought he would be blasting shirts into crowds at Christian concerts, not leading a mission to get Bibles into the hands of military personnel across the globe. But what Jeff is keenly aware of is when you leave something in God’s hands—even a T-shirt cannon—he will use it for his glory.

“When I got the cannon, I wanted to take it for a test run, and my buddy said, ‘why not put stuffed monkeys in there instead?’ I thought he was crazy, but when we gave it a try at the concerts, the people in the audience went nuts. That’s when I got the name ‘the Monkey Commando,’” said Jeff.

Though not Jeff’s favorite nickname, the Monkey Commando was soon well-known across Southern California.

“Totally out of the blue, I got a call from a chaplain of a military base near us. He asked if the Monkey Commando could come and shoot monkeys to the kids on the base during a concert. I, of course, said yes, and that is what started our connection with the military. Soon we found ourselves traveling to military bases to put on Christian concerts and, of course, shoot stuffed monkeys from the cannon, and Operation Worship began,” said Jeff.

While at one of these events, Jeff sat down with the chaplain on base and asked him, if the sky was the limit, what would he want for his military personnel?

“I was floored when he said Bibles. I said, ‘There are all kinds of places you can get free Bibles.’ He said, ‘But those aren’t the kinds of Bibles we need.’”

The chaplain shared three specifics: It must include both Testaments, you have to be able to carry it in your pocket, and the cover needed to be camo to match uniforms.

“I’m a web guy. I didn’t know anything about publishing Bibles, but I knew we had to make this happen. Through some friends, I reached out to Tyndale House Publishers, and they made the chaplain’s dream come true” said Jeff. “Not only did it include all the chaplain’s specifications, it was in the New Living Translation, which couldn’t be more perfect for this ministry.”

The first 25,000 copies of the first edition of the Operation Worship Bible in Army camo were sent to Fort Hood. Word spread quickly, and within a week the Bibles were gone. Since then, more than 1.5 million Operation Worship Bibles have been distributed to military personnel around the world. The Bibles are available in camo matching every branch of the military’s uniforms and with different unit insignias, signifying that the Word of God is uniquely personal for each one of us.

“U. S. Military chaplains and commanders from all over the world have reached out asking, ‘Are you the Bible guy? How can I get Bibles?’ They know the importance of this ministry. When you get on a plane or a boat heading to who knows where and have no idea what you’ll be facing, you take a closer look at your life and you need the peace that only God gives,” said Jeff. “Each one of these Bibles is personal, and each person who receives one is precious. I hope that when they open that Bible they are able to understand who God is and that he has a purpose for them.”

From Monkey Commando to Bible Guy, Jeff has let God lead the way. Health issues, difficulty finding funding, and discerning the next step has brought Jeff and his wife, Patti, to their knees in prayer, asking for God’s leading.

“We told God, ‘This is your ministry, not ours. You tell us where to go and what to do,’” Jeff explained. “And God is always faithful.”

Operation Worship continues to look for partners to help them put the Word of God into the hands of soldiers all over the world. If you are interested in becoming a part of the Operation Worship story, visit OperationWorship.com. If you donate right now your donation will be matched up to 26,000 Bibles. Donate here 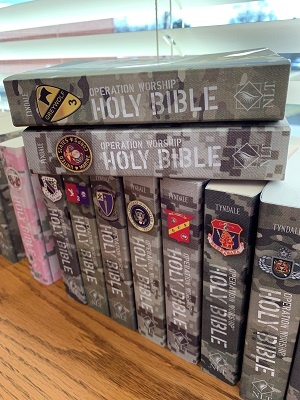 The world goes by at a million miles an hour, and it seems to go faster and become more complicated at every turn. It’s not at all hard to get distracted, disgruntled, and even disillusioned. We chase so hard after […]

“Always be joyful. Never stop praying. Be thankful in all circumstances, for this is God’s will for you who belong to Christ Jesus.” 1 Thessalonians 5:16-18, NLT Notes from the Life Application Study Bible Our joy, prayers, and thankfulness should not fluctuate […]