One of the best things about the Filament Bible is that the content can be updated regularly in order to provide you with more and more excellent resources as time goes on. Here is what we’ve been up to lately: 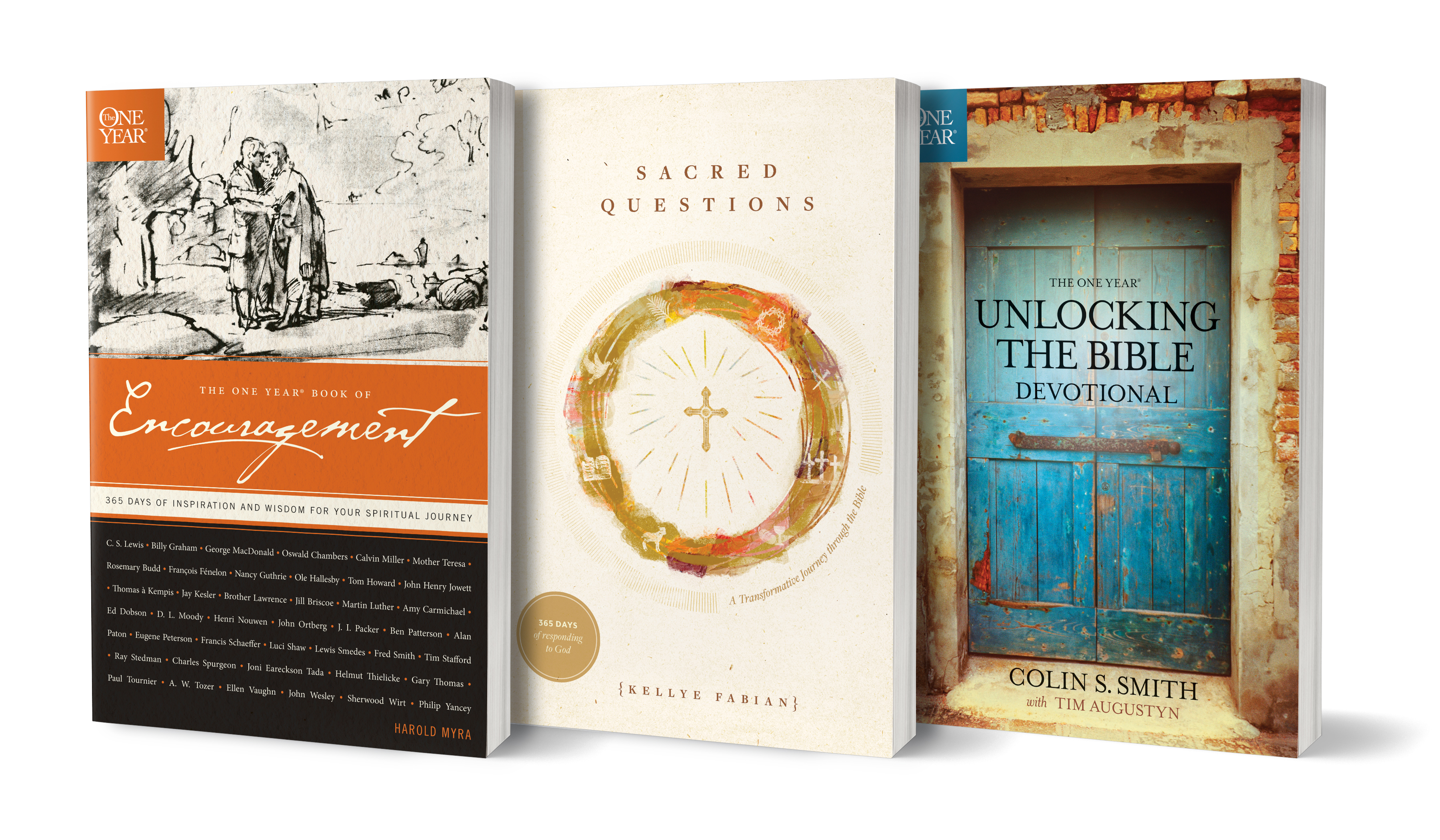 We added over 1,000 new devotional articles in the Reflect area. That more than doubles the total amount of devotional content in the app! You’ll find one or more of the new articles on almost every page of the Bible. These new articles came from three excellent devotional books:

The One Year Book of Encouragement by Harold Myra

The One Year Unlocking the Bible Devotional by Colin S. Smith and Tim Augustyn 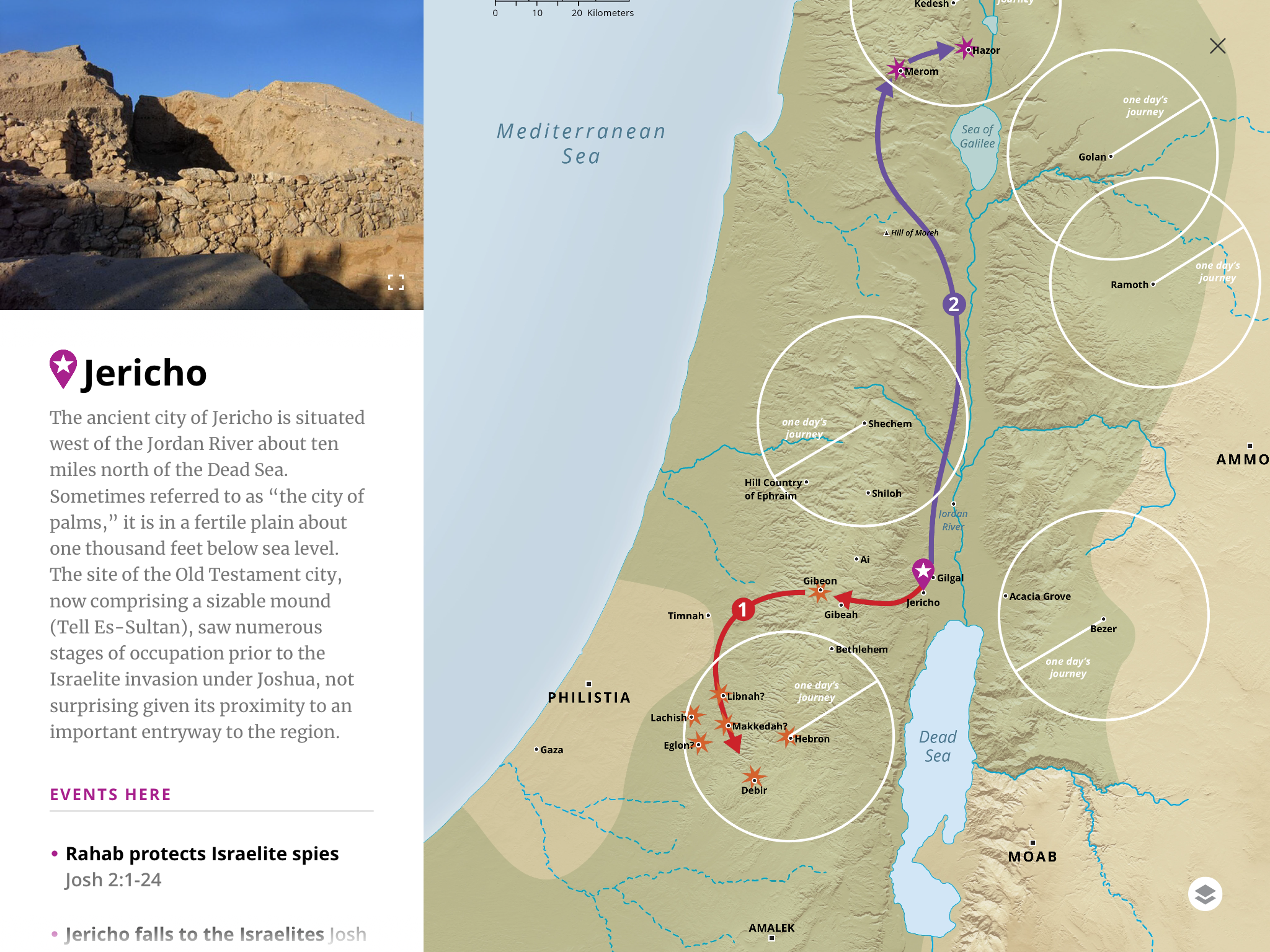 We added three more maps for even better access to key geographical information exactly where you need it:

Conquest and Judges map shows the key cities in the period of time between when Joshua led the people of Israel into the Promised Land all the way until the time of Samuel. This map (pictured) also includes layers that show Joshua’s military campaigns and the location of the designated cities of refuge. You can find this map everywhere from Joshua 1 through 1 Samuel 7.

Tribal Allotments map shows the boundaries that were laid out for the twelve tribes of Israel. While these boundaries were never perfectly achieved, it gives a sense for the way God laid out the land for his people to inhabit. This map appears throughout the Old Testament where these tribal territories are mentioned.

Letters to the Seven Churches map in Revelation shows the locations of the seven cities that received letters from John in Revelation 1-3. 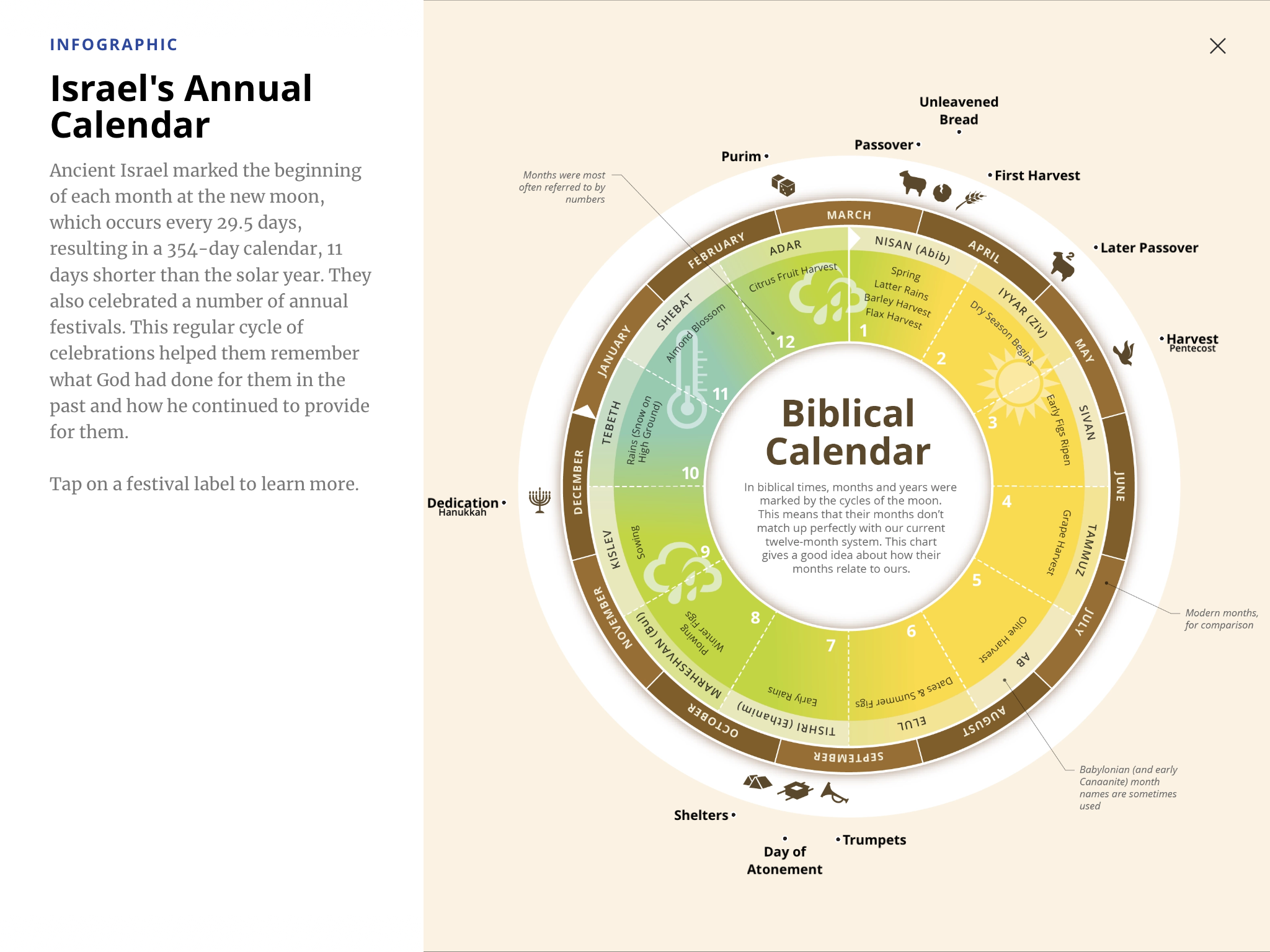 Thirteen new infographics and illustrations have been added all over the Bible:

Jewish Society infographic shows the relationships between the various groups of people that Jesus and the early church interact with in the first century. Learn about Pharisees, Saduccees, Zealots, and more. You can find this infographic throughout the Gospels and Acts.

Israel’s Annual Calendar infographic (pictured) is filled with information about how the ancient Hebrew calendar works compared to our modern calendar. See how their lunar months align with our solar months, see when their annual religious festivals occurred (along with information about their significance), and even get a sense of the climate and agricultural seasons.

Israel’s Sacrifices infographic gives quick access to information about the sacrificial system that was laid out for Israel in the law of Moses. Learn the difference between a sin offering and a guilt offering.

Ten more new infographics can also be found throughout the Bible. In Genesis 1, learn about the Creation Account Structure, and in Genesis 6, see Noah’s Ark. There’s a great new infographic in Exodus 7-12 about The Plagues. Learn all about the cyclical nature of Israel’s early life in the Promised Land through the Judges Cycle Infographic in Judges 3-16. The Cyrus Cylinder is a key piece of archaeological evidence for the return of God’s people to the land of Israel, and you can see it in Ezra 1. Study the Four World Empires behind Daniel’s vision of a statue in Daniel 7. Visualize the Parables of Jesus with an interactive chart in Matthew 13. See the seven “I Am” Sayings of Jesus in a simple infographic in the Gospel of John. And check out a photo of a Whale Shark in Jonah and a Ziggurat in Genesis 11.

One of the most important things we can do to nurture our faith is to be engaged in regular personal study of God’s Word. While each of us have our own methods and strategies for our daily devotions, it can often be helpful to learn from what is working for other people to find inspiration […]

Scroll to the bottom to learn about how you can get a free Filament Bible t-shirt.   The Filament Bible has always been a great tool for those hoping to grow their faith through deeper Bible study, devotional reading, compelling visuals, and informative videos from The Bible Project. With the help of The Worship Initiative, […]

Personal Bible Study with the Filament Bible »
We use cookies on our website to give you the most relevant experience by remembering your preferences and repeat visits. By clicking “Accept”, you consent to the use of ALL the cookies. However you may visit Cookie Settings to provide a controlled consent.
Cookie settingsACCEPT
Manage consent