This collection bundles all four titles from the thrilling Riley Covington series by Jason Elam and Steve Yohn into one volume for a great value!

#1 Monday Night Jihad
He thought his deadliest enemy knelt across the line of scrimmage. He was wrong!
After a tour of duty in Afghanistan, Riley Covington is living his dream as a professional linebacker when he comes face to face with a radical terrorist group on his own home turf. Drawn into the nightmare around him, Riley returns to his former life as a member of a special ops team that crosses oceans in an attempt to stop the escalating attacks. But time is running out, and it soon becomes apparent that the terrorists are on the verge of achieving their goal—to strike at the very heart of America. This softcover edition also includes a teaser chapter of the next Riley Covington thriller.

Written by a member of the NFL; gives readers an insider look at the world of professional athletes and military intelligence. Examines the challenges of homeland security in large-venue events. Explores the tension between the desire for revenge and the constraints of the Christian faith, especially as it relates to Islam. Jason Elam has recently returned from Iraq, where he visited and supported the troops. You can read his journal at mondaynightjihad.blogspot.com

#2 Blown Coverage
Linebacker Riley Covington returns to another season of mini-camp for the Colorado Mustangs just as a wave of terrorist attacks begin to occur across the country. Sleeper cells are being awakened—likely by the leader of the Cause, who has recently escaped from captivity and is coordinating attacks not only on America but also on Riley and his loved ones. As Jim Hicks, Scott Ross, and the rest of the Counterterrorism Division follow leads in Europe, Riley goes on the offensive to draw out his attackers. But can the Cause be stopped before they’re able to reach their ultimate goal?

#3 Blackout
Riley Covington is still reeling from his father’s brutal murder when he learns he’s been traded. Meanwhile, the counterterrorism division has detected a plot to detonate electromagnetic pulse bombs that could leave the U.S. without power, communications, and transportation—right down to dropping planes out of the sky. CTD scrambles to stop the attacks, but they run out of time. Amid the fallout, Riley, Scott, Skeeter, and CTD must regroup to make sure the second bomb doesn’t reach its destination.

#4 Inside Threat
After taking two football seasons off, Riley Covington is attempting to make a comeback in the league while trying to forget Khadi Faroughi, now on security detail for a prominent senator. But a new attack turns both of their lives upside down yet again. During a state funeral, terrorists overrun the National Cathedral and take senators, congressmen, and their entourages hostage, including Khadi. This new generation of The Cause is made up of homegrown terrorists—an inside threat to the security of the nation. They release most of the hostages, but Khadi and several others are kept behind as significant bargaining chips.

The Cause pledges to behead one member of Congress each day throughout the month of Ramadan as a punishment for their own country’s rejection of Islam. Despite the protests of Counter-Terrorism Division director Scott Ross, Riley races to CTD armed with a plan and a fierce determination to rescue Khadi at all costs. 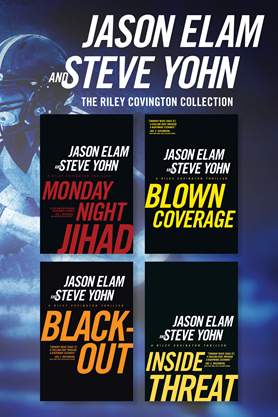