This collection bundles all 3 of the blockbuster Left Behind Prequels by Tim LaHaye and Jerry B. Jenkins together into one e-book for a great value!

#1: The Rising
The Rising begins a new Left Behind series that will give you a glimpse into the lives of your favorite characters before the Rapture. Have you ever wondered what life was like before the Rapture for Rayford, Irene, and Chloe Steele, Bruce Barnes, Buck Williams, and Tsion Ben Judah? Plus, see why Viv Ivins plays such a pivotal role in Nicolae Carpathia’s life. What were the events surrounding Nicolae’s sudden rise to power? How did he become filled with evil? You will find all these answers and more in this exciting new series! In The Rising, Marilena Carpathia has only one dream: to be a mother. So when a mysterious clairvoyant promises the fulfillment of this dream, Marilena does not hesitate. Through genetic engineering and the power of the prince of darkness himself, Marilena is about to become a chosen vessel, one who will unknowingly give birth to the greatest evil the world has ever known. Halfway around the world, God’s plans are subtly being carried out too. Young Ray Steele is determined to avoid one day taking over the family business. Instead, Ray sets his heart on becoming a pilot. Soon Carpathia’s and Steele’s lives will intersect. And good and evil will clash in an explosion that will shake the world. The eternal battle for souls has come to earth. The world hurtles toward the countdown to the Rapture.

#2: The Regime
Dynamic Romanian multimillionaire Nicolae Carpathia’s sphere of influence steadily grows as he parlays his looks, charm, charisma, and intellectual brilliance into success in business and politics. But is it mere coincidence that those who oppose or offend him suffer to the point of death? Meanwhile, a young Buck Williams begins his journalistic career. Pilot Rayford Steele gains more responsibility at work and at home. Scientist Chaim Rosenzweig begins work on a secret formula that could change the world. All three go about their daily lives, unaware of each other or of the powerful young man from Romania. Around the world, the stage is being set for the cataclysmic event that will change the world forever.

#3: The Rapture
In this the final prequel to the blockbuster series, the story features the Rapture three-quarters of the way through the book and then follows characters such as Irene and Raymie (and others) up to heaven, where they are able to see events in the Tribulation from heaven’s perspective. The story alternates between events on earth immediately after the Rapture (covering lots of things the authors wished they could have covered in the original volumes) and characters in heaven and how they view the chaotic events on earth. 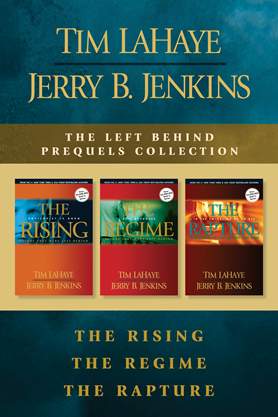