This collection bundles all three novels from author Candace Calvert’s exciting Grace Medical series into one e-book for a great value!

Trauma Plan
Sidelined by injuries from a vicious assault, chaplain Riley Hale is determined to return to her former duties as an ER nurse. But how can she show she’s competent when the hospital won’t let her attempt even simple tasks? Determined to prove herself, Riley volunteers at a controversial urban free clinic despite her fears about the maverick doctor in charge.

Dr. Jack Travis defends his clinic like he’s commander of the Alamo. He’ll fight the community’s efforts to shut its doors, even if he must use Riley Hale’s influential family name to make it happen.

As Riley strives to regain her skills, Jack finds that she shares his compassion—and stirs his lonely heart. Riley senses that beneath Jack’s rough exterior is a man she can believe in. But when clinic protests escalate and questions surface about his past, Jack goes into battle mode and Riley wonders if it’s dangerous to trust him with her heart.

Rescue Team
Tired of running from her past, nurse Kate Callison intends to become Austin Grace Hospital’s permanent ER director and make Texas her home. Despite staff friction, she’s moving ahead. Then unthinkable tragedy wraps the ER in crime tape, bringing swarms of media, legal chaos—and a search-and-rescue hero who seems determined to meddle in her life.

As Kate and Wes discover more about each other, new respect becomes something deeper. Kate wonders if her heart might have finally found a home. Then an unsolved missing persons case—and a startling new one—become catalysts that threaten the loss of all she and Wes have found.

Life Support
Nurse Lauren Barclay put her life on hold to keep a watchful eye on her troubled sister. It’s why she’s back in Houston. But that means confronting the brooding physician assistant who caused painful turmoil in her family—and left Lauren with memories her heart can’t forget.

PA and single parent Elijah Landry is no stranger to stormy relationships, including one with his father, who is threatening him with a restraining order. It won’t stop Eli from protecting his disabled brother—or from making peace with Lauren. He wants that and so much more.

But as Lauren and Eli draw closer, a powerful hurricane roars toward Houston. Survival instincts take priority and everything changes. Can hope weather the storm? 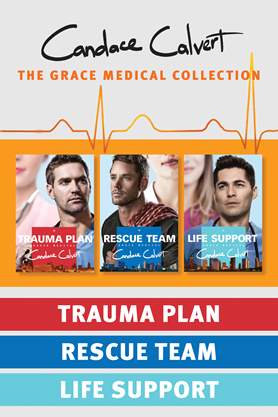