This collection bundles all 6 volumes of Susan May Warren’s charming Christiansen Family novels together in one e-book, for a great value!

Take a Chance on Me (2014 Christy Award winner!):
Darek Christiansen would be a dream bachelor, except for the wounded heart he’s been nursing since the tragic death of his wife, Felicity. New assistant county attorney Ivy Madison simply doesn’t know any better when she bids on Darek at the Deep Haven charity auction. Nor does she know that a plea bargain she crafted three years ago kept the man responsible for Felicity’s death out of jail. Caught between new love and old grudges, Darek must decide if he can set aside the past for a future with Ivy.

It Had to Be You:
Eden Christiansen never imagined cheering on her younger brother Owen—a reckless NHL rookie—would keep her on the sidelines of her own life, with little time to focus on her own career. Owen could use a mentor . . . but she knows better than to expect help from team veteran Jace Jacobsen. Now at a crossroads about his future in hockey, Jace's bad-boy reputation has him trapped. And the guilt-trip he's getting from Eden Christiansen isn't making things any easier. But when Owen's carelessness leads to a career-threatening injury, Eden and Jace begin to wonder if they belong on the same team after all.

When I Fall in Love (2015 Christy Award finalist!):
Hawaii was the last place Grace Christiansen ever imagined she'd vacation, much less fall in love. But when her family surprises her with a cooking retreat in paradise, she is thrown headfirst into an adventure. Max Sharpe may make his living on the ice as a pro hockey player, but he feels most at home in the kitchen. Which is why he takes a three-week culinary vacation each year in Hawaii. Upon being paired with Grace for a cooking competition, Max finds himself drawn to her passion, confidence, and perseverance. But as his secrets unfold, Grace is torn between the safe path in front of her and what her heart truly desires.

Always on My Mind:
After a failed dig, aspiring archaeologist Casper Christiansen heads home to Minnesota to face his feelings for Raina Beaumont. But when he arrives unannounced on her doorstep, he receives quite a shock: Raina is pregnant. Heartbroken, especially when he discovers the identity of the baby's father, Casper tables his dreams and determines to help his older brother prepare the family resort for its grand reopening. But one of Casper's new jobs constantly brings him into contact with Raina, whom he can't seem to forget.

The Wonder of You:
Mortified after her year abroad is cut short, Amelia Christiansen returns to Deep Haven, certain she isn't brave enough for the adventures she's dreamed of. The last thing she expects is for the man who broke her heart to cross the Atlantic and beg forgiveness. Heir to a European hotel dynasty, Roark St. John has trekked from one exotic locale to another, haunted by tragedy and family expectations. He'll do anything for a second chance with Amelia. But Roark's continued presence only highlights the questions pursuing her. Could finding her new place mean leaving home behind?

You’re the One That I Want:
An injury ended Owen Christiansen’s NHL career, but a job on an Alaskan crabbing boat offers a fresh start, maybe even a shot at romance with Elise “Scotty” McFlynn, the captain's daughter. Scotty, however, doesn't believe in happily ever after—especially with someone like Owen. Her instinct is confirmed when Casper Christiansen arrives to drag his prodigal brother home, only to be detained in connection to a crime back in Minnesota. As part of her new job on the Anchorage police force, Scotty must escort both brothers to Deep Haven, where she is thrust into an unfamiliar world of family, faith, and fresh starts. 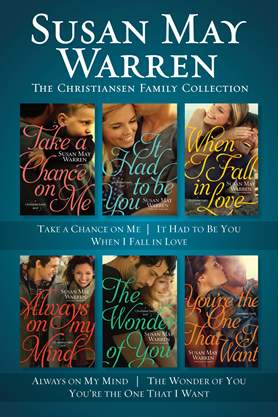