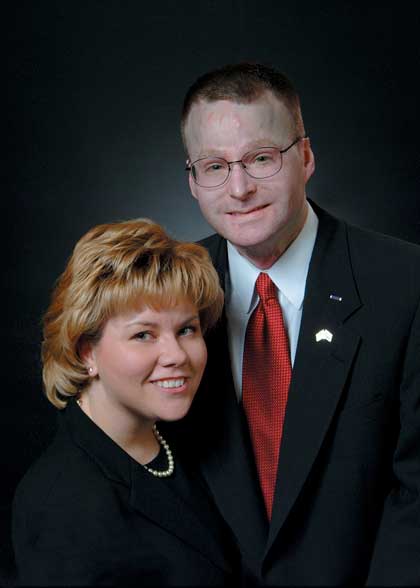 Mel Birdwell is the wife of Lt. Col. Brian Birdwell, a survivor of the terrorist attack on the Pentagon on September 11, 2001. Because 60 percent of her husband's body was covered with burns, Mel knows his survival is a miracle. She stayed by her husband's side as he underwent more than 30 operations and months of multiple skin grafts, physical therapy, and recovery. Although it was difficult to be away from their son during this recovery period, the family remained solid because of their devotion to God and to each other.

Originally from Davis, Oklahoma, Melva Collins first spotted Brian Birdwell, a handsome 1st Lieutenant, in her brother-in-law's military yearbook. A correspondence ensued for several months. After Brian returned from Korea, he and Mel kept in contact by phone. The long-distance relationship became a face-to-face romance in 1986. They married in May of 1987.

In 1989, the Birdwells moved with their new son, Matthew, to a new duty station in Germany. While in Germany, Mel volunteered with the American Red Cross and was employed as its installation volunteer coordinator until June 1993. After returning to the States, Mel graduated with a bachelor's degree in human development and family studies from Kansas State University.

Mel directed the senior nutrition programs for Leavenworth County, Kansas, and for the American Red Cross in Tacoma, Washington. While she enjoyed working with senior citizens, she feels the greatest job is being a stay-at-home mom. When Matt began his freshman year in public high school, Mel began spending her time making quilts for the ministry, participating in Precepts Bible Study, and volunteering at her church.

In June 2002, Mel was presented with the fourth annual Robertson McQuilkin Award for Commitment to Marriage by FamilyLife, an international family outreach organization at work in over 100 countries. She was honored for her strong devotion to her 15-year marriage and for her dedication to seeing her husband's health fully restored.

The Birdwells have a golden retriever, Hayley, and currently reside in Manassas, Virginia.

All Products From Mel Birdwell