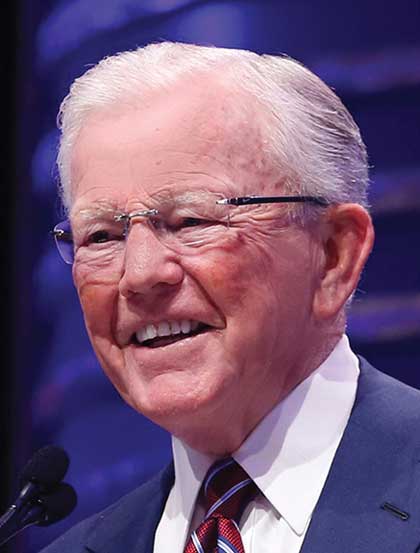 Joe Gibbs has earned positions in the Pro Football Hall of Fame and the NASCAR Hall of Fame, having achieved a remarkable level of success in both professional sports. Gibbs served as head coach of the Washington Football Team from 1981 to 1992 and again from 2004 to 2007, leading the team to ten playoff appearances, four NFC Championship titles, and three Super Bowl Championships. He was also named to the NFL 100 All-Time Team in 2019 as one of the ten best football coaches in history. Amazingly, Gibbs has found comparable success in NASCAR, helping to lead Joe Gibbs Racing to five NASCAR Cup Series titles since it started racing in 1992. Gibbs started JGR with his older son, J.D., who passed away in January of 2019 following a long battle with a degenerative neurological disease. His legacy continues through the J.D. Gibbs Legacy Fund's support of the Young Life ministry, as well as through the sharing of his story, which can be found at jdgibbslegacy.com. Gibbs's younger son, Coy, is now leading the family's NASCAR operations as chief operating officer. Joe and his wife, Pat, live in North Carolina near their eight grandchildren.

All Products From Joe Gibbs