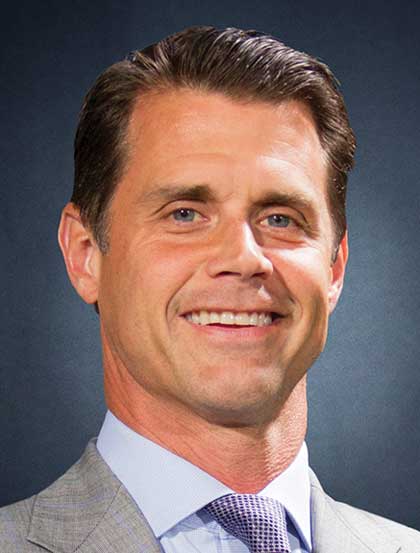 Dave Alpern began his career with Joe Gibbs Racing in 1993 as an unpaid intern. Since then he has held nearly every position in the front office, including overseeing consumer products, communications, and sponsorships before being named team president.

As one of the longest-tenured executives in the sport, Alpern has seen the team grow from 18 employees to nearly 600 and has worked with C-level executives for many of the world's top brands, such as Toyota, FedEx, Mars, Stanley, the Coca-Cola Company, and Comcast. Dave had been invited to the White House on multiple occasions after winning NASCAR championships in 2000, 2002, 2005, 2015, and 2019.

Born in Frankfurt, Germany, as the son of a high-ranking CIA official, he returned to the States at age two and grew up just outside the nation's capital in Northern Virginia. He attended Oakton High School (along with childhood friend J. D. Gibbs, the son of Hall of Fame Washington Redskins head coach Joe Gibbs) and earned a degree in communications from George Mason University in Fairfax, Virginia. His plans to pursue an MBA were put on hold in 1993 when he was offered an internship with Coach Gibbs, which led to a move to Charlotte, North Carolina, and a one-company career that is now in its third decade.

Alpern is a regular university guest lecturer, particularly at the University of North Carolina Kenan-Flagler Business School for both their undergraduate and graduate business programs. He teaches on marketing, sponsorship, and social media, and also enjoys corporate speaking.

Dave is married to his college sweetheart, Stacey, and they have three sons: twins who recently graduated from the University of North Carolina at Chapel Hill and an audio engineering student at Belmont University in Nashville. His interests include snow skiing, snowboarding, surfing, and playing an occasional round of golf. He is also an avid fan of the Washington Redskins, the Washington Capitals, and the Carolina Tar Heels.

All Products From Dave Alpern