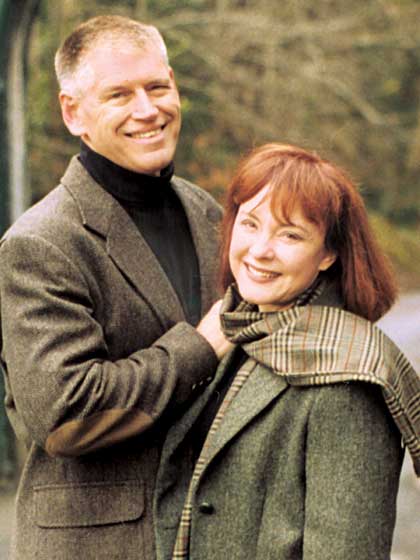 Bodie and Brock Thoene (pronounced Tay-nee) have written over 45 works of historical fiction. That these best sellers have sold more than 10 million copies and won 8 ECPA Gold Medallion Awards affirms what millions of readers have already discovered—the Thoenes are not only master stylists but also experts at capturing readers' minds and hearts.

In their timeless classic series about Israel (The Zion Chronicles, The Zion Covenant, and The Zion Legacy), the Thoenes' love for both story and research shines.

With The Shiloh Legacy series and Shiloh Autumn—poignant portrayals of the American Depression—and The Galway Chronicles, which dramatically tell of the 1840s famine in Ireland, as well as the 12 books in the Legends of the West series, the Thoenes have made their mark in modern history.

In the A.D. Chronicles, their most recent series, they step seamlessly into the world of Yerushalayim and Rome, in the days when Yeshua walked the earth and transformed lives with His touch.

Bodie began her writing career as a teen journalist for her local newspaper. Eventually her byline appeared in prestigious periodicals such as U.S. News and World Report, The American West, and The Saturday Evening Post. She also worked for John Wayne's Batjac Productions (she's best known as author of The Fall Guy) and ABC Circle Films as a writer and researcher. John Wayne described her as "a writer with talent that captures the people and the times!" She has degrees in journalism and communications.

Brock has often been described by Bodie as "an essential half of this writing team." With degrees in both history and education, Brock has, in his role as researcher and story-line consultant, added the vital dimension of historical accuracy. Due to such careful research, The Zion Covenant and The Zion Chronicles series are recognized by the American Library Association, as well as Zionist libraries around the world, as classic historical novels and are used to teach history in college classrooms.

Bodie and Brock have four grown children—Rachel, Jake, Luke, and Ellie—and five grandchildren. Their sons, Jake and Luke, are carrying on the Thoene family talent as the next generation of writers, and Luke produces the Thoene's audiobooks.

Bodie and Brock divide their time between London and Nevada.

All Products From Brock Thoene

The Gates of Zion

A Daughter of Zion

The Return to Zion

A Light in Zion

The Key to Zion