Melanie Dobson is the award-winning author of more than twenty historical romance, suspense, and time-slip novels. Five of her novels have won Carol Awards; Catching the Wind and Memories of Glass were nominated for a Christy Award in the historical fiction category; Catching the Wind won an Audie Award in the inspirational fiction category; and The Black Cloister won the Foreword magazine Religious Fiction Book of the Year. Melanie is the former corporate publicity manager at Focus on the Family and owner of the publicity firm Dobson Media Group. When she isn’t writing, Melanie enjoys teaching both writing and public relations classes. Melanie and her husband, Jon, have two daughters and live near Portland, Oregon. Her newest release is, The Winter Rose.

I used to teach at George Fox University, a school in Oregon founded by the Religious Society of Friends, and had the privilege of learning about Quaker history there. The characters and storyline for this novel are a culmination of research and personal experience, and while The Winter Rose isn’t based on the life of one historical figure, Grace—my Quaker heroine in Nazi-occupied France—was inspired by women like Mary Elmes, Alice Resch, and Marjorie McClelland who cared for children during World War II through the American Friends Service Committee.

Beauty in brokenness was one of the most important themes in The Winter Rose.I was hoping to demonstrate the French concept of brocante—salvaging items that someone else trashed, then restoring and repurposing them in their brokenness for something new. I wanted to show how God can heal the most painful of wounds, restore complicated relationships, and through the incredible power of forgiveness and prayer, use the nicks and gashes and ultimately redemption in our stories for good.

Faith is integral to both my past and present protagonists in this time-slip story. Grace is a devout Quaker in the 1940s who craves peace, beauty, and simplicity. The Nazi occupation of France and persecution of the Jewish people turns her world upside down, and she has to wrestle with how to fight against evil in her world. In the contemporary story, my two main characters are also struggling to recover from painful events. Addie, a widow in her twenties, is trying to recover from her husband’s deception, and her mentor, an older man named Charlie, has to confront the tragic choices and trauma from his childhood in order to find healing for himself and his family.

I wrote The Winter Rose for readers who love to learn about history and enjoy being inspired and challenged through fiction. Part of this story was poured straight out of my heart for moms who’ve had a child they love turn away from their faith and family. My hope is that the heartache and eventually redemption among my fictional characters will encourage parents to never stop praying for their kids.

I’m not familiar with any other novels featuring Quaker characters who help kids escape Nazi-occupied France. This story is also unique in that much of it takes place after World War II as the characters process the loss and abandonment in their past and wrestle through their dreams for the future. Ultimately my characters must use their unique gifts to bring truth and grace into their world and fight in their own way to rescue others.

Usually I travel to my main settings to research my novels, but with the pandemic, I wasn’t able to go to France or even to the American Friends archives in Philadelphia. People were incredibly generous with their time and resources to get me the information I needed for this story. The AFSC archivist answered my many questions, digging through files from home and forwarding them to me. The president of the American Synesthesia Association, Carol Steen, spent a significant amount of time on Zoom to help me build my synesthete character of Marguerite. During our time together, I was surprised to learn that synesthesia has been recognized in Europe for more than a hundred years. Carol also educated me on the artistic talents of those who see words, numbers, or emotions in vibrant color.

Then our Zoom world gave me the opportunity to connect with a Jewish gentleman who was rescued by Mary Elmes in 1942 and hidden in France for the remainder of the war. I was tremendously honored that he would share his story with me. While visiting a location and interviewing in person is ideal, it was a blessing in this strange, difficult season to find others willing to help me compile all the factual information needed to write The Winter Rose.

This is my sixth novel set during World War II, and as I research each book, I often learn new things that I’m not able to use in my current story. I originally learned about the Quakers’ work as I wrote The Curator’s Daughter, and before I started my next book, I spoke with several friends about the possibilities. While I wasn’t able to travel overseas, I spent several days writing at a local Quaker retreat center with a lake that inspired Tonquin Lake in The Winter Rose. I pour a bit of myself into every novel I write and pieces of this story were inspired by my belief in God’s power to redeem families.

I had several favorite characters! Marguerite was a super fun character to write with her ability to see emotion in color and her passion to paint what she saw on the chateau walls. I also liked writing from the perspective of Louis who had been wounded deeply as a child and was living a lie in his later years. What a relief for me, as the author, to be able to offer him the gift of restoration. I was going to say that the perspective of Grace, my historical protagonist, was challenging to write, but Addie, the heroine in my contemporary story, who was even more challenging. I changed her backstory several times as I tried to understand where she came from and what happened to her deceased husband. While it stretched me as a writer, I was so pleased in the end with how Grace and Addie overcame the trauma from their pasts and fought for those they loved.

Often my novels stem from dilemmas that I’m wrestling through in my personal life and sometimes they are inspired by a friend’s story or something that I’ve read or a place I’ve visited, wondering what happened there. I’m a dreamer by nature so my mind often wanders between fact and fiction. Even something seemingly simple, like the weeping willow in this novel, can spark an entire plotline for me.

The World War II era is fascinating because a small group of people are still alive who remember what happened, some of who are just now sharing their story. We don’t always know the motivations of historical figures, but much of what occurred during the Holocaust was undeniably good or evil. As a Christ follower, I believe there is a spiritual enemy in our world, and World War II clearly illustrates this battle between right and wrong. It is my honor, as a novelist, to share the stories of men and women who risked their lives in the midst of evil to love others.

Right now I’m working on a series of books for younger readers called The Magic Portal, and it has been pure joy for me to brainstorm with my daughters to create these fairyland books. I’m also working on my next time-slip novel and will have more details on that story soon. 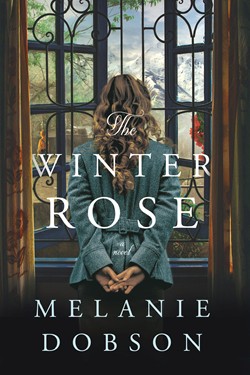 In this gripping WWII time-slip novel from the author whose books have been called “propulsive” and a “must-read” (Publishers Weekly), Grace Tonquin is an American Quaker who works tirelessly in Vichy France to rescue Jewish children from the Nazis. After crossing the treacherous Pyrénées, Grace returns home to Oregon with a brother and sister whose parents were lost during the war. Though Grace and her husband love Élias and Marguerite as their own, echoes of Grace’s past and trauma from the Holocaust tear the Tonquin family apart.

More than fifty years after they disappear, Addie Hoult arrives at Tonquin Lake, hoping to find the Tonquin family. For Addie, the mystery is a matter of life and death for her beloved mentor Charlie, who is battling a genetic disease. Though Charlie refuses to discuss his ties to the elusive Tonquins, finding them is the only way to save his life and mend the wounds from his broken past.