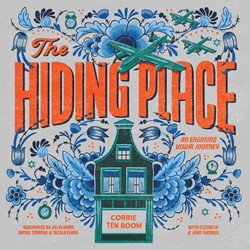 The Hiding Place is Corrie ten Boom’s personal story of faith, forgiveness, and love for the persecuted Jewish community during the World War II Nazi invasion and occupation of Holland. Part of an underground resistance movement, Corrie and her family risked their lives to hide Jewish friends within a secret wall space of the Beje, their beloved clock shop and home in Haarlem, Netherlands. Her heroic actions eventually led to her arrest and imprisonment at Ravensbrück, the German Reich’s largest concentration camp for women.

For the first time, the ten Boom family’s heart-wrenching story of sacrifice and survival is presented as a special edition complete with rare family photos, accents of Dutch Delft–style design, artwork by Dutch artists, and personal ephemera. Hand-lettered inspirational quotes and Scripture combined with artwork reminiscent of World War II Europe make The Hiding Place come alive like never before.