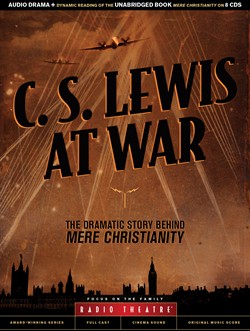 This behind-the-scenes drama powerfully integrates the ideas Lewis explored in Mere Christianity with the very real influence that comes from living out a Christian life in a period of trauma, proclaiming the reasons to trust God even when the world screams otherwise.

In addition to the three-hour Radio Theatre production, C. S. Lewis at War includes a complete and unabridged dramatic reading of Mere Christianity—capturing the clarity, intelligence, and wit of the original classic. This provides listeners with a full ten hours of audio entertainment on 8 CDs.