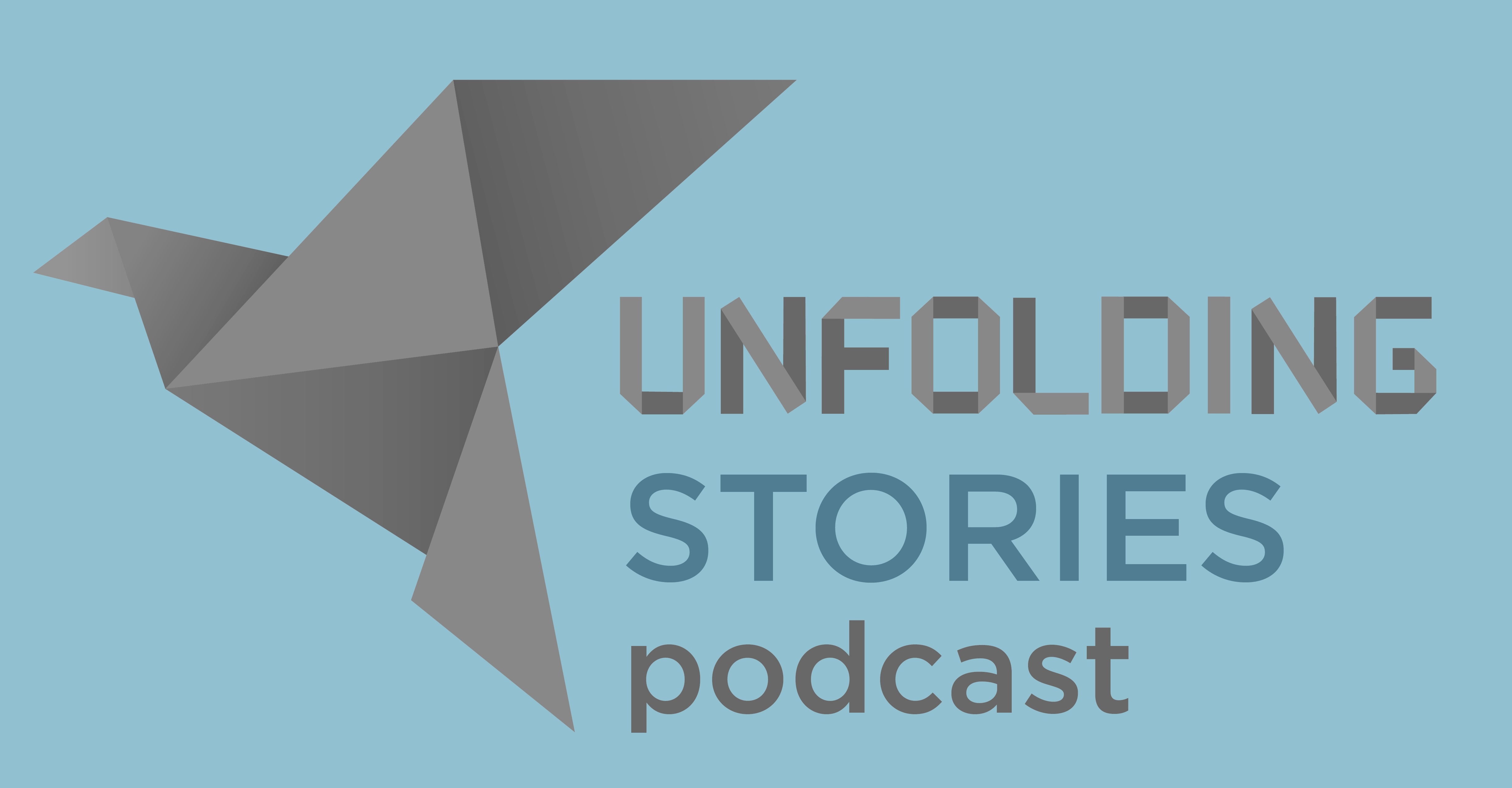 We’ve hit the penultimate episode in our first season of our encouraging new Christian podcast, Unfolding Stories! Episode nine is available to download right NOW from your regular podcast platforms. Links to download are given below.

In this episode, we hear from Leanne. In her struggles with depression and other mental health issues, Leanne began doubting God’s love for her. Pressure from her family to look perfect for church led her to believe that God couldn’t possibly love someone so broken.

Happily, God never gave up on Leanne and sent encouragers to lift her up and assure her of God’s presence in her life. 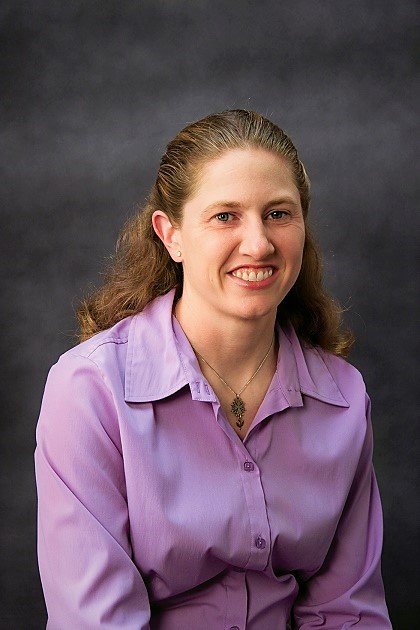 God is always with us; He never lets us go. Leanne’s story serves as proof that you can feel entirely broken—dysfunctional even—and still be loved by the Lord. You are an essential part of the body of Christ, no matter what you’re dealing with, and God is here to help us all find strength in our weaknesses.

You can read the full transcript from Leanne’s episode below; just scroll down.

We all need reassurance from our loving God from time to time. Life is full of hard seasons, pain, and experiences we wish we didn’t have deal with. Jesus didn’t promise us an easy life through belief in Him; in fact, He said the opposite. Here are some wonderful resources for navigating the dark times and leaning in to God, not turning away: 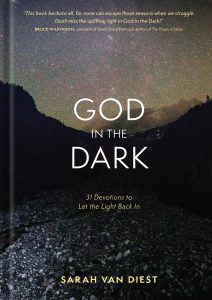 God in The Dark: 31 Devotions to Let the Light Back In by Sarah Van Diest.
To walk through darkened days is part of the human experience. To walk through them with faith, comfort, strength, joy, and hope is part of the divine experience. Our eyes, though, are often clouded to those blessings by the thing oppressing us. When we remember and recognize our Father’s faithfulness, when we see reality with eyes of understanding, the darkness ebbs and the light of hope grows. The impossible, unbearable, and unthinkable become the hidden passageway to truth, hope, and joy in Christ. 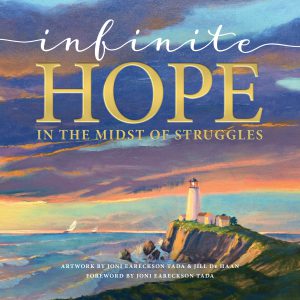 Infinite Hope . . . in the Midst of Struggles, Joni and Friends, Inc.
Infinite Hope, rich with inspirational true stories and breathtaking artwork, will bless you with the kind of hope that never fades and always brightens the darkest paths of life. This is no ordinary hope, but instead, a life-transforming hope. It is a hope that will fill you with confidence and inspire you to find peace with yourself and your circumstances. Stories and insights about suffering and the goodness of God, along with illustrations from Joni Eareckson Tada and Jill De Haan, will give you a richer, deeper love for Christ, our Blessed Hope.

I grew up in a Christian home. My parents took me and my three siblings to church every Sunday—twice. We attended the Christian Reformed Church. I knew who God was and what Jesus did from a pretty early age. I can’t say that I had any doubts as a youngster.

But I grew up in a dysfunctional family. I noticed that my sisters, who are twelve and ten years older than I am, often fought with my mom. I knew something was off.

My brother, who is four years older than me, avoided my mom, even though he was the favored one because he was the boy. He would come home after school, watch a movie, eat dinner, and disappear to his room.

I was a super active kid. I played outside a lot, either with my brother or with the neighbor kids. When I was 10, I was outside with two younger friends, and we were doing pop-wheelies into the street. As I picked up speed down the driveway and went into my wheelie, the last thing I saw was a speck out of the corner of my eye. Next thing I knew, I was waking up in the hospital. I had been hit by a pickup truck, flown into the air, done a summersault, and landed on my back, skidding a little. My bike ended up in the ditch on the other side of the street. I spent five days in the hospital—my spleen was bruised and they wanted to make sure it wouldn’t burst—but otherwise I had only suffered a concussion and had stitches in one leg. In those days, you didn’t wear a helmet either. The doctors were amazed I was alive; it really was a miracle.

At 10 years old, I was already asking big questions: Why am I still here? What purpose does God have for me? I continued to attend church with my family, but things were still not good at home, and they were starting to get worse. As I moved into my teens, my mood changed drastically, and I was exhibiting signs of depression.

I didn’t like the way my family put on a show all the time. It seemed very hypocritical. Especially at church, we were not allowed talk about problems in our lives. My parents’ generation never talks about problems; they have to look good on the outside—anything bad happening in the family would make the parents look bad. So even if my mom and I had a huge fight in the car on the way to church, I had to put on a happy face before we went in. I hated it.

I attended high school youth group at my church, but as I was not allowed to really say anything about what was going on with me, I had to deal with the depression on my own. My oldest sister had become a youth leader at my church, mostly for my sake. My mother was very controlling, especially about our looks. She also tried to control our communication with each other and with our dad. My oldest sister would sometimes take me to Brookfield Zoo, near Chicago Illinois, in the winter. It was fun, but Mom grilled me on what we talked about when I got back, and she always assumed the worst about what could have been said about her. It was hard. But spiritually, things were going okay. I made Profession of Faith in the fall of my Junior year.

I’ve always played sports. In my early high school years, I played sports year-round. I was in marching band in the fall, on the basketball team during the winter, and on the softball team in the spring. And so long as I met the age requirements for the park district, I played softball during the summer. But I didn’t do well playing the politics game that is required to excel in the athletic world. So in basketball, even though I was one of the best players, I sat on the bench a lot. I was so sick of it by Junior year that I decided to quit. But that also meant that I spent more time at home around my mom. The conflict only got worse, and I spiraled deeper into depression. I was still attending youth group at my church three Sunday nights per month, but during the fourth Sunday, while my parents were at their Bible study, I would go to the kitchen and cut the top of my arm with a knife. It was winter, so I could wear long-sleeve shirts to hide it. And I didn’t cut too deeply—just enough to bleed a bit and heal in a week or so. I had it down to a science and no one would find out.

My sisters noticed that something wasn’t right. Having gone through depression themselves, they knew what signs to look for and urged my mom to get me into counseling. Finally, she took me to see a Christian psychiatrist. There my mom learned I had been cutting myself. She was shocked and appalled, as if she was the only one hurt by it. She also blamed the bike accident for my mood shifts. I was diagnosed with depression and put on Prozac. I immediately went into a manic phase. I had promised I wouldn’t cut anymore, but I soon began cutting and hiding it again. My psychiatrist discovered it and, with my psychologist, decided I should be hospitalized while they changed my medication. I was livid. Music is also very important to me, and I was hospitalized when a state music competition I was signed up for would take place. They thought they were helping me by taking that pressure off, but I felt even worse because I was letting my friends in our flute trio down.

After high school I decided to try college without medication. My psychiatrist agreed and that fall, I went off to Calvin College in Grand Rapids. I met some good friends my first week there, but I was already showing signs of depression. I ate as few meals as I could and still survive. It was another way I was reaching out for help, seeing if anyone noticed or cared. I also decided that, since I had the choice, I wouldn’t go to church. I didn’t care anymore, and I didn’t think God would want me. But my college friends noticed I wasn’t doing so well. As it turned out, my friend Christi suffered from depression and anxiety, and she was a pastor’s daughter. I was surprised because I had decided that depression and God were incompatible. Thankfully, my friends cared enough to explain that depression isn’t a spiritual issue and that God really did love me. God could still use me because he loves to use cracked vessels, and we are all cracked in some way. Christi was on medication, and it helped her. She helped me understand that it was okay to be a Christian and suffer from depression. It wasn’t a problem that couldn’t be overcome by God.

Second semester of Freshmen year, I sought help from another psychiatrist. This time I was correctly diagnosed with Bipolar 2, which has the ups and downs in energy but is characterized by a depressive mood throughout. We eventually found the right medication, and I was on a much better path.

I began attending church regularly again, and my relationship with God grew. After college, I moved back home and decided to join the leadership of my church’s high school youth group. I wanted to help kids who suffered from depression and needed someone who understood them. I wanted to use my experience to God’s glory, and I still have good relationships with several of those kids.

I went through many hopeless places, but God was always with me. And I thank God that even someone who went through a period of severe doubt could be used by him to encourage and help others.

If you or someone you know is suffering with depression or mental illness, please seek professional medical help straight away. While God is a wonderful healer, He does not expect us to go through our struggles alone, and He encourages us to seek help wherever possible.

We’re excited to announce that episode three of our brand-new podcast about Christian testimony, Unfolding Stories, is now LIVE and ready for download from all major platforms! This episode we learn how Andrew discovered the root of his self-destructive behavior and how finding God helped him find healing. Now Andrew is on a much better […]

This week’s blog is by Greg Paul, author of Resurrecting Religion and was originally posted on The Disciple Maker. Given the travesties the church has committed in the past and the nonsense it still gets stuck in today, it’s tempting to just chuck the whole notion of religion into the waste bin of failed concepts. Mighty tempting, indeed. Especially when we ourselves are also […]

« The Road to Discipleship