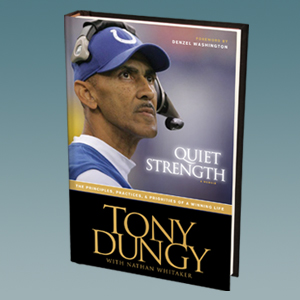 The Principles, Practices, & Priorities of a Winning Life.

The #1 New York Times bestselling book from Tony Dungy is now available in softcover – with a SPECIAL NEW CHAPTER. In it, Coach reflects on the 2007 football season and last year’s successful hardcover release of Quiet Strength!

Tony Dungy’s words and example have intrigued millions of people, particularly following his victory in Super Bowl XLI, the first for an African American coach. How is it possible for a coach–especially a football coach–to win the respect of his players and lead them to the Super Bowl without the screaming histrionics, the profanities, the demand that the sport come before anything else? How is it possible for anyone to be successful without compromising faith and family? In this inspiring and reflective memoir, Coach Dungy tells the story of a life lived for God and family–and challenges us all to redefine our ideas of what it means to succeed.

He led his team to #1 in the world-and showed the world a better way to live, lead, and succeed.

When Tony Dungy led the Indianapolis Colts to victory in Super Bowl XLI-and made history as the first African American coach to win the big game-millions of people, amazed by the success of his quiet, authoritative leadership style, wondered: how does he get it done?

In the pages of this fascinating memoir, Tony Dungy reveals the secrets to his success-principles, practices, and priorities that have kept him on track despite overwhelming obstacles, including personal trials, firings and stereotypes.

In the face of so much adversity, Tony has not only survived but risen to the very top of his profession in a way that’s won the respect of fans, players, and even his competitors. His thoughts on leading, succeeding, and attaining true significance will inspire you to take a long, hard look at the things that really matter in your own life.
By clicking “Accept All Cookies”, you agree to the storing of cookies on your device to enhance site navigation, analyze site usage, and assist in our marketing efforts.
Cookie settingsACCEPT
Manage consent