“Even when things look bad, I give it my best.”—Meb Keflezighi

When Meb Keflezighi (Kef-lez-ghee) signed up to run the Boston Marathon in 2014, no one expected him to be the first one to cross the finish line. But Meb’s life is all about hope and second chances—starting with his very survival. The child of a small African country ravaged by a brutal war, Meb arrived in America with nothing but the clothes on his back, speaking no English, and never having raced a mile. So how did he end up an A student, one of the most celebrated and respected athletes of his generation, winner of the 2009 New York City Marathon, and at the age of 38, the first American man in 31 years to win the Boston Marathon?

His story sounds like the living embodiment of the American dream . . . but Meb’s path to victory hasn’t been smooth. Not long after he stood on the Olympic podium as a silver medalist in 2004, it all came crashing down. Everything he once knew to be true was tested—his faith in God, his values, and his belief that he was born to run.

Run to Overcome tells the inspirational story of a man who discovered the real meaning of victory, and shares the secrets to overcoming the odds in your own life.

Quick Preview
The incredible true story of Meb Keflezighi, winner of the 2014 Boston Marathon!
When Meb Keflezighi signed up to run the Boston Marathon in 2014, no one expected him to be the first to cross the finish line. But if there’s one thing Meb knows how to do, it’s overcome. Yet Meb is the living embodiment of the American dream. His family came to the U.S. to escape poverty and a violent war; 12-year-old Meb spoke no English at the time and had never raced a mile. Thanks to hard work and determination, he excelled academically and became an Olympic silver medalist. But it all came crashing down when Meb, a favorite for the Beijing Olympics, fractured his hip and pelvis during the trials and was left literally crawling. That same day, he lost his close friend and fellow marathoner to a cardiac arrest. Devastated, Meb was about to learn whether his faith in God, the values his parents had taught him, and his belief that he was born to run were enough to see him through. Run to Overcome is the story of a true American champion who discovered the real meaning of victory against all odds. Now with an updated chapter after Meb’s amazing finish in Boston. 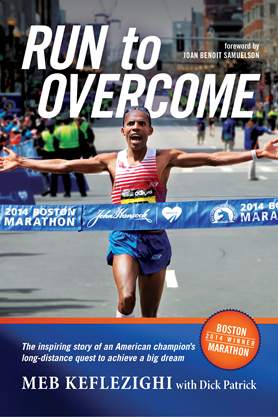