Tony Dungy Inducted into the Pro Football Hall of Fame

Tony Dungy Inducted into the Pro Football Hall of Fame

The following article was written by Todd Starowitz, Director of Public Relations at Tyndale House Publishers.

It’s tough to have a book tour without an author. Minutes before our promotional marathon for the eventual New York Times number-one bestseller Quiet Strength was to begin, the person in the starring role was nowhere to be found. Beads of sweat were starting to form on my hairless dome, and my heart was fluttering.

As I glanced nervously toward the revolving front door of our hotel, I asked myself,  Are we really going to be late to our first interview?

I write “our” because the book promotion business is a team effort, and in this case, a full crew had loaded into the large black SUV at the Marriott Marquis in Manhattan: literary agent D. J. Snell, cowriter Nathan Whitaker, and publicist Jessica Quinn. Our driver, Anthony, who has become a vital part of the Tyndale team when we have authors in New York, was standing next to me by the door of the large black SUV.

After all I had heard about Tony Dungy, he was the last person I thought I’d have to worry about being late. I had met Tony only once previously. Our Tyndale team had visited his Indianapolis home in 2007 to present our vision for his memoir. We were one of four publishing houses competing to tell his story, and each house had thirty minutes to explain why they were best positioned to do so. After that meeting—and from everything I knew and read about him—I was sure Coach Dungy wouldn’t be late without good reason.

Coach Dungy’s journey as an author had begun years before. Nathan Whitaker, who worked in the front office for the Tampa Buccaneers when Dungy coached the Pewter and Black (and orange and red), had tried to no avail to get Tony to collaborate with him on his memoir. After Dungy led the Indianapolis Colts to a Super Bowl XLI victory, he finally agreed to Nathan’s impassioned pleas.

Quiet Strength was a major undertaking for Tyndale. While many football-related books release during the season, our leadership thought it would be wise to release the book in July when Coach Dungy would have time to promote it. To meet that type of timetable—an average book takes more than a year from acquisition to reach bookshelves—we would need to go in hypermode. It was important to all of us that this book didn’t turn into yet another run-of-the-mill post-event book that looked like it had been thrown together in weeks. Our editorial, sales, production, marketing, and PR teams were scrambling, but we were highly motivated to work on what we felt would be an impactful book.

About one month prior to launch, one of our marketing managers wondered if we had overestimated the interest in this title. I was still confident that the book would do well, while never thinking it would become one of the bestselling sports memoirs in history. Yet about a month prior to launch, presales were pedestrian.

Was it possible Quiet Strength would be a bust? Now that more than one million copies are in print, such a suggestion seems silly, but although Coach Dungy had become much better known after winning the Super Bowl, he was still far from a household name.

Several weeks prior to launch, our marketing team suggested that Tony visit the plant where the books were being bound and printed, which happened to be about an hour outside of Indianapolis. If nothing else, a visit from a Super Bowl–winning coach would energize its employees and provide a boost in interest for the book.

One of the first things anyone who meets Tony mentions is his humility. Yet even the most humble among us can get caught up in the excitement. While walking the plant grounds, Tony noticed a high level of security.

Tony casually said to the representative giving him the tour, “I’m kind of surprised that my book would require so much security.” The man whispered back, “Coach, they are printing Harry Potter and the Deathly Hallows here.”

The juxtaposition—one of such a humble man assuming security at the plant was for his book—still garners laughs and some good-natured ribbing.

Book tours for “celebrity” authors are intense. In most cases, these individuals are trying to pack as many media and book-signing opportunities as possible into a small window of time. One reason Quiet Strength was so commercially successful was because Coach Dungy devoted nearly two weeks of his time for promotion. In that ten-day period, he conducted nearly 150 interviews in New York, Georgia, New Jersey, Indiana, Florida, and California.

In such an environment, when 16- to 18-hour days were the norm rather than the exception, anyone’s warts are bound to surface. Instead, Coach Dungy’s exceptional character and personality were cemented in the eyes of all of us.

There are so many fun stories from the tour. While stopping to take a brief 15-minute break at a Starbucks in Manhattan, a young college-aged student approached Coach Dungy to sign his football. Tony asked him how he knew he was in the coffee shop. His boss at one of the too-big-to-fail investment firms had seen Coach Dungy walking down the street and sent this young man, his intern, to secure a signed football for his collection.

Coach Dungy was interviewed on Good Morning America, The Tonight Show with Jay Leno, and just about every other major media outlet in the country during the tour.  The one outlet on which he couldn’t appear because of scheduling conflicts was Late Night with David Letterman. An Indiana native, Letterman wanted Tony on his show very badly.

Several weeks after the original two-week tour ended, Tony was able to fly back to New York to be on the show. A businessperson from the Indianapolis area graciously flew our book team to New York via private plane. Because of his responsibilities with the Colts, Coach had to do the interview and fly back on the same day. Yet when we arrived at the small municipal airport, Tony not only had a garment bag but a full-size carry-on suitcase with him as well.

We were all interested in why Coach Dungy had brought a suitcase with him for a day trip. Well into the trip from Coach Dungy’s house to the airport, I finally asked, “Tony, you do know that we are coming back later this evening, right? I’m wondering why you brought a suitcase.”

Tony responded, “In the preproduction call they suggested that I bring the Lombardi Trophy.” Yes, the trophy given to the Super Bowl–winning team was in the backseat of our car in a slightly beat-up, canvas suitcase.

While the ESPYS, Letterman, Leno, and Good Morning America were highlights, the book signings are what made the tour so special. Coach Dungy brought his two Super Bowl rings (he had won one as a player with the Pittsburgh Steelers as well) to the signings and allowed anyone who wanted to try one on to do so. I became the unofficial ring watcher because I was terrified that someone would inadvertently, or not so inadvertently, walk off with a ring. Coach Dungy didn’t seem concerned. The closest anyone came was when Letterman jokingly put them in his coat pocket for safekeeping during the Late Night interview, and we had to remember to ask for them back.

Coach Dungy made every person walking through the lengthy signing lines feel special. Black, white, brown, yellow, young, old, and every age in between, Coach Dungy engaged with each person and made him or her feel special. Well into the tour when all of us were beyond exhausted (I once even tried to pay for dinner with my hotel key card—unfortunately, it was not accepted), Coach Dungy’s demeanor was steadfast. He was kind, faithful, and genuine throughout.

We felt badly for him when we saw the look on his face after he had signed 50 impromptu autographs on a Manhattan sidewalk but couldn’t sign 25 more for waiting fans because we had somewhere else to be. His genuine look of disappointment matched those of the people on the street who’d missed their opportunity to mingle with a living legend.

If anyone says anything bad about Tony Dungy, they are fighting words to those who have spent any time with him. Tony Dungy is what everyone says he is: humble, God-fearing, and a loving father, husband, and leader. Coach Dungy makes everyone around him better because the last thing anyone wants to do is to let him down.

On the evening of August 7, 2016, Tony Dungy will step to the stage to be inducted into the Pro Football Hall of Fame. While his University of Minnesota and Pittsburgh Steelers teammates, the players he coached in Tampa and Indianapolis, and his family will take great pride in this special man, so, too, will our Tyndale team.

I expect Coach Dungy to be on time for his HOF induction.

So where was Coach Dungy the morning I was frantically looking for him outside the Marriott Marquis so that he wouldn’t be late for his first interview?

Tony Dungy, now a Hall of Fame coach, then a Super Bowl champion, was already in the black Suburban, in the very back seat. That told us all we needed to know about Tony Dungy before the tour even began. 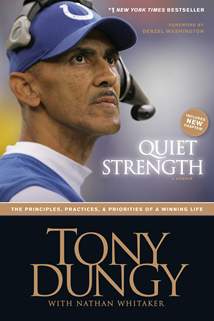