The following excerpts are from Run to Overcome by Meb Keflezighi, chapter 12, pages 225-248. Meb recalls his experience at the 2014 Boston Marathon.

Coming in to the Boston Marathon, I felt I had already won on a personal level, because I had met my main goal of getting to the starting line healthy. That had not been an easy chore, and it had taken careful planning and a lot of help from my friends. You’ve heard the saying that it takes a village to raise a child? Well, it took a village to raise up a champion for the Boston Marathon this year. There were so many people involved in my success in getting ready…

Boston 2014 was probably the only marathon where I was able to run my own race. When you’re running at an elite level, with so many other great competitors, every race involves a series of adjustments between your own race plan and the strategies of the other top runners. Obviously, you’ve done your homework beforehand, but if another runner makes a move early in the race, you have to decide on the spot whether that person is legit and how you’re going to respond. If two or three people make a move, you have to go with them—at least if you intend to win the race. So it’s very difficult to run your own race.

After making my big move early in the race, I decided I didn’t care if another runner ended up catching me from behind. I wanted to inspire people by giving my best effort, and that’s what I was doing. Once again, I set my mind on my overall plan, streamlining my mechanics and using the tangent (the shortest way on the route) as efficiently as I could…As I ran, I asked for God’s blessing to give me victory, which I desperately wanted for myself and for the city of Boston and for the United States on this special Marathon Monday.

A writer for the Boston Globe has described the final mile as “a hazy mix of sound, exhaustion, pain, and lost coordination” that can make it difficult for runners “to calculate distance, pace, and finishing time,” but I had some recent experience under my belt that only served to energize me as I entered the final drive to the finish line.

The crowd along the course was just fascinating—really, really ecstatic, and very loud. As I took the final left-hand turn, I crossed myself and prayed, God, give me the strength of the victims, give me the strength of the crowd, and please, please help me to get to the finish line! The crowd’s chants of “USA! USA!” were so loud that I knew I had it. It was a magical moment when I broke the tape and secured the victory.

The awards ceremony was another once-in-a-lifetime experience. I was speechless when they placed the laurel wreath on my head and handed me the trophy…When they played the national anthem, my heart soared.

With tears in my eyes, I kept looking up to the sky and thanking God for giving me the opportunity to run and for allowing this victory to happen at such an important time. Like everyone, I would rather that the events of 2013 had never occurred. But because we could not take back what happened, I felt this victorious performance was the best way to help people heal. 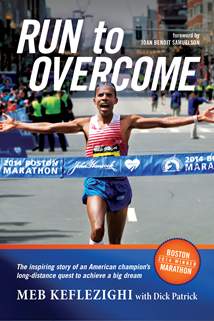