Here’s Why You Need to Quit Being a Peacekeeper

Here’s Why You Need to Quit Being a Peacekeeper

“God blesses those who work for peace, for they will be called the children of God.” —Matthew 5:9

Jesus spoke these words during the Sermon on the Mount. It is one of eight blessings in the Gospel of Matthew commonly known as the Beatitudes.

It is very important for us as Christians to understand this verse correctly. Throughout my years as a pastor, I have frequently heard people incorrectly say, “Blessed are the peacekeepers . . .”

That’s a drastic error, and here’s why.

Peacemakers strive to create peace and attempt to reconcile things and people that are at odds with one another; peacekeepers strive to keep peace at all costs.

Proverbs 10:10 says, “People who wink at wrong cause trouble, but a bold reproof promotes peace.”

Peacekeepers, by not acknowledging wrongdoings in an effort to maintain peace, are actually winking at them.

Peacekeepers and peacemakers can actually be considered complete opposites.

Southern white men and women in the Jim Crow era could have called themselves peacekeepers.

They wanted to maintain things as they were without discord or change; they wanted to keep the peace as it was—racism disguised as peace.

Civil rights activists had to sometimes disturb the peace in an effort to make a new kind of peace—a superior version of peace.

This also happens within the walls of our churches.

One reason numbers are declining within our churches is because we do not share our thoughts, concerns, opinions, and doubts with each other for the sake of keeping the peace.

And then members feel like they have no voice and get so upset that they leave—never to grace the door of a church again.

Here are three ways we can make peace instead of keeping peace:

Peacekeepers do not want to create discomfort and hurt by disrupting the peace, but it is important to realize that not all hurt is harmful. The disciples are a prime example of this. In Acts, they had a choice. They first had to disrupt peace to create a further and even greater peace. If they had wanted to keep peace, they would have never mentioned Jesus’ name ever again.

Humans are created to be social creatures, but peacekeepers often feel like their needs, thoughts, pain, and grievances do not matter. So instead, they just let all of that build up. They keep it to themselves until it explodes, and then they completely ruin the peace they have tried so desperately to keep.

3. Engage with people who are different from you (in race, age, religion, sexual orientation, etc.)

Oftentimes we avoid people who are different from us in order to keep peace that might be disrupted if we engage others who may view the world differently.

Whether it is race relations in America or speaking with your Muslim or gay neighbor, it is important to make peace with each other, not keep a faux sense of peace that might actually be disguised prejudice, narrow-mindedness, fear, or bigotry.

What is surprising is that in an effort to keep the peace, many are actually sinning.

There is nothing admirable about denying truth, communication, and concern in an effort to keep peace; in fact, it does quite the opposite.

Although it won’t be easy, it is important that we take our lives back from being peacekeepers and instead become peacemakers.

Stephen Arterburn is an award-winning author with over 10 million books in print. His latest book, Take Your Life Back, which he coauthored with Dr. David Stoop, will release in October 2016. Steve cofounded New Life Clinics and is currently host of the radio and television show “New Life Live” as well as president of New Life Ministries.

Check out www.takeyourlifeback.tv/resources for Take Your Life Back workbook session videos. 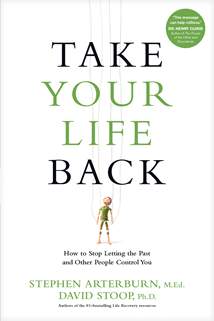